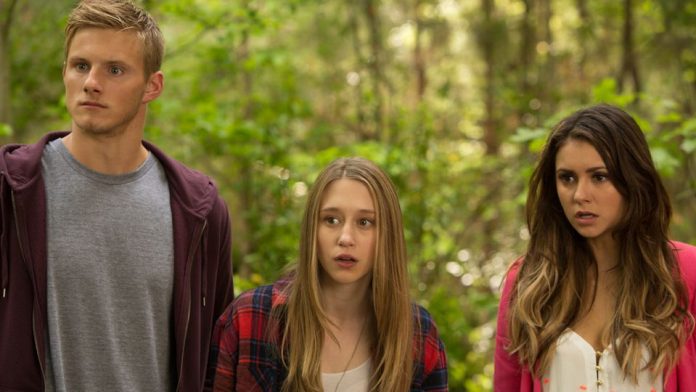 The Final Girls is a strange beast. In fact director Todd Strauss-Schulson (A Very Harold & Kumar 3D Christmas) seemingly achieves the impossible – knocking out a horror-comedy starved of both scares and laughs that somehow still works. It’s saved by a surprisingly touching mother-daughter dynamic that – by the end – packs a genuine emotional punch, although getting to the payoff requires some patience.

Taissa Farmiga (younger sister of Vera) stars as Max, the troubled teenage daughter of an eighties scream queen (Malin Åkerman) tragically killed in a car accident. Her ma’s most infamous role was in cult classic Camp Bloodbath and – somewhat reluctantly – she agrees to attend an anniversary screening that goes south pretty quickly. Max has barely settled into her seat when she and her pals are sucked through the cinema screen and into the film.

Cue Scream-light riffs on familiar slasher movie mechanics as the present-day teens are forced to team up with the ill-fated (and of course fictional) camp counsellors to battle the big bad – a machete wielding behemoth who was once a timid little kid called Billy. Strauss-Schulson clearly knows his blood-soaked onions, yet for all his toying with traditional genre tropes everything feels a little flat.

There’s mileage in the culture-clash shenanigans that see feminism take a kicking from Adam DeVine’s sex-obsessed jock stereotype, but often the film’s just a little too knowing and self-conscious. So-bad-it’s-good dialogue doesn’t work if it’s deliberate and of the talented cast – which also includes Green Room’s Alia Shawkat – it’s only Thomas Middleditch who consistently raises a chuckle. Fans of Silicon Valley will be well aware of his gloriously squirmy delivery.

It’s when the silliness subsides that things finally spark into life. With the stakes raised and the body count increasing the relationship between Max and her mother’s on-screen character takes on added poignancy. What previously seemed like out-of-place sentimentality suddenly becomes the film’s true saving grace, Farmiga and the particularly impressive Åkerman providing real emotional depth. Who would have though it? Beneath the horror-comedy hijinks lies a beating heart.

Strauss-Schulson also really turns on the style towards the end. From the moment night descends and the kids tool up for the final onslaught there’s not a single bum note, old Billy boy lured into the open by an Adderall-fuelled striptease and a blast of Warrant’s immortal Cherry Pie. After that there’s time for a chase through fog-shrouded woods and a last stand that sees a defiant heroine face down an unstoppable brute as thunder cracks and red-forked lightening splits the sky.

The Final Girls will be part of a double bill with the spoof-tastic Galaxy Quest at Film4 Summer Screen at Somerset House on August 13. Details of the full line-up can be found at www.somersethouse.org.uk/film/film4-summer-screen-2016.

Malin Akerman on diving into dark territory on thriller The Aviary