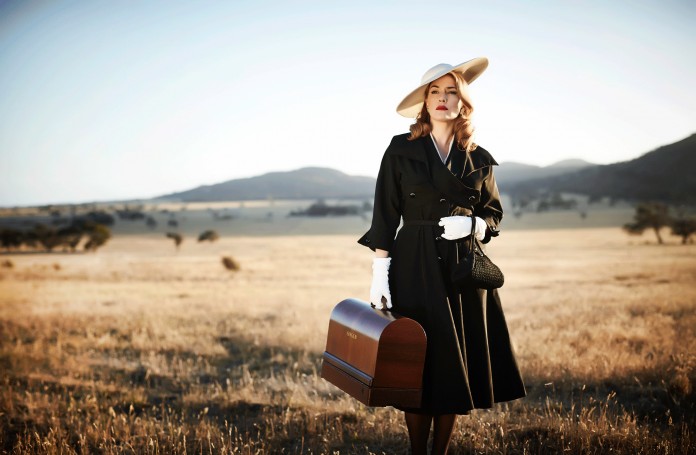 While the recently released, enchanting romantic drama Brooklyn is a subtle, understated picture studying the notion of leaving home, now we have the antidote. For Jocelyn Moorhouse’s The Dressmaker is an unsubtle, overstated picture studying the notion of returning home. Though if making the decision of only seeing one on the big screen this weekend, you’ll be much better off opting for the former.

Based on Rosalie Ham’s bestselling novel, and adapted to the big screen by screenwriter P.J. Hogan (Muriel’s Wedding) – we delve into 1950s, small town Australia, where femme fatale, and fashion guru Tilly Dunnage (Kate Winslet) returns home – to right a few wrongs of her past, having been forced into expatriation after being accused of murdering a local boy decades years earlier. Hoping to reconnect with her troubled mother, Molly (Judy Davis), she also gets close to old friend Teddy McSwiney (Liam Hemsworth) while determined to win over the unforgiving, narrow-minded locals by transforming the fashion of this otherwise antiquated, conservative town.

With a handful of impressive performances, with the likes of Hugo Weaving and Sarah Snook also standing out, The Dressmaker is a film that centres around Winslet, and it’s a role that she thrives in, as she manages to be vulnerable and empathetic while always remaining confident and wickedly divarish. There’s a playful edge to this endeavour, with comic tendencies throughout and a distinctive implementing on whimsicality, albeit somewhat contrived in parts. You feel that had our characters decided to drive half an hour down the road they’d be entering the curious world of the Young and Prodigious T.S. Spivet.

Moorhouse does struggle to find a compatible balance between farcicality and the more intimate, human elements however, as a film that revels primarily in the former. During the latter stages there is a lot asked of the audience, as we’re supposed to emotionally invest in the narrative, and connect with the character’s respective problems, but given the frivolity and inanity of what we’ve sat through, it becomes a challenge to suddenly abide by the profundity of it all.

Though being so absurd in parts is something of a saving grace, as a film with a distinctive, irreverent tone that makes for an endearingly ludicrous experience. The Dressmaker is completely bonkers, particularly in the closing sequences – and in a cinematic landscape where originality is seldom seen, to be completely bonkers is most definitely not a bad thing.

Avatar The Way of Water’s cast on new technology, a global cast & the Na’vi language creation

Avatar: The Way of Water Review