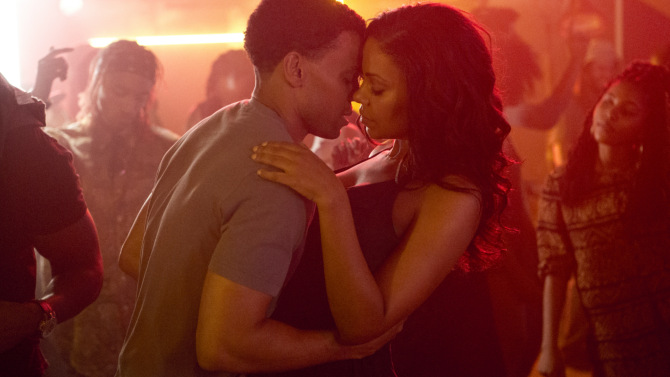 David M. Rosenthal’s surprisingly effective thriller The Perfect Guy stands out as one of the best examples of a female-led movie that should get more attention than it will probably achieve.

Sanaa Lathan stars as Leah, a professional woman who seems to have found the perfect balance between career and personal life. Her doting boyfriend Dave (Morris Chestnut), clearly loves her, but is hesitant about long-term commitment due to the problems he has seen marriage create in his own family. Following an argument, Leah and Dave go their separate ways, and soon after she meets Carter (Michael Ealy) who waltzes into her life and sweeps her off her feet. The couple spend more and more time together, and initially things seem perfect.

Carter eventually reveals a darker side to his personality however, when his temper flares up and he attacks a man for talking to Leah. She is shocked and breaks off the relationship… but Carter doesn’t take rejection well. He embarks on a series of obsessively disturbing actions and even a court-ordered restraining order isn’t enough to deter him. Soon Dave and Leah are back together, but this is merely a red rag to Carter who insists that if he can’t have Leah, then no one can.

The Perfect Guy starts off as a relationship drama but slowly develops into something more recognisable as a thriller. Carter’s transformation is hardly nuanced, but Ealy does a convincing enough job of terrifying Leah and the audience. Meanwhile it’s great to see a film featuring a black cast that deliberately avoids the stereotypes that are so prevalent in films labelled as “black cinema”. You could easily change the ethnicity of the cast and it would all still work in exactly the same way, while there is no pandering to how producers mistakenly think audiences expect non-white characters to act on screen.

This isn’t a film appealing to any particular demographic, and if it is then it’s to the burgeoning audience looking to see strong female characters on screen. The Perfect Guy is a far better film that Suffragette, for example, and boasts a better, full-rounded lead character. Lathan is great as Leah. At no point is she a simpering damsel in distress. She knows what she wants and she avoids the conventional trappings of a movie victim by fighting back rather than being a mere passenger.

Admittedly the finale is the sort of thing that ultraconservative gun nuts in America will whoop and cheer for, but its forgivable in the context of the film that has proceeded it.

Win The Intruder on DVD

Is the mind playing tricks on you? First trailer for the ‘Jacob’s Ladder’ remake lands