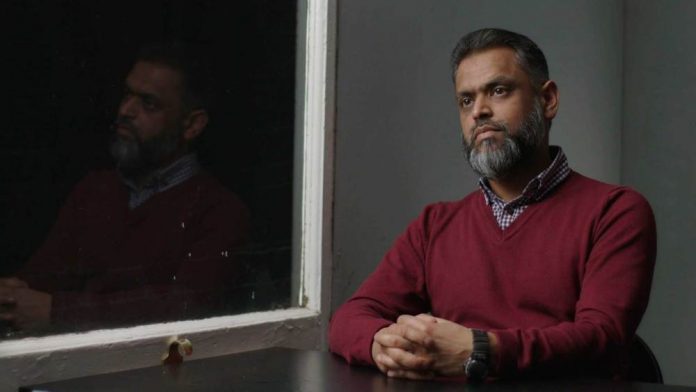 When the locale Guantanamo Bay is uttered today it does not have the same impact as it did during the Bush administration. History will, however, come to scrutinise the abhorrent human rights violations that occurred here, and be seen as a dark chapter in modern politics. In 2002, Moazzam Begg, a Pakistani-Muslim from Birmingham, would become one such prisoner. Through the 2000s Begg would become the mainstream media’s monster. Ashish Ghadiali’s The Confession directly addresses the ex-prisoner to understand why MI5, CIA, ISS, and many other anti-terror governing bodies were targeting him, and to listen to the man behind the media frenzy.

Begg’s calm and self-assured demeanour coupled with his intellect make for easy listening as he talks through his existential crises during the 80s and 90s, and his socio-political activism later in life. In fact, one can draw parallels between his narrative to those of the youth today who travel to be with ISIS. Begg explains the cultural uncertainty of his identity as a Pakistani-British Muslim; the extreme right-wing nationalists that paraded his local streets denounced all Muslims and Pakistanis as British, which then pushed Begg into a slew of identities. This attitude became increasingly prevalent post-9/11 as Begg says about the anti-Islam of modern politics: “I wasn’t anti-state. The State was anti-me.”

In such a racially and politically charged environment that pushed him to adopt jarring and conflicting identities, that society imposed upon him, you needn’t wonder why he travelled elsewhere to find himself and others that he could identify with. What makes Begg’s pilgrimage particularly interesting is in his refusal to adopt the populist rhetoric. His intellectual fight against Western propaganda and his intellectual fight against the orthodox Islamic faith marks him a polemical figure, resting on this pivot between two opposing ideologies. Indeed, the events of 9/11 only exacerbated such matters.

Shot in a part interview, and part interrogation, the film unpicks Begg’s public persona to rewrite the infamous character that many Western news outlets throughout the 2000s had conjured, in an open dialogue to understand the subject. What is revealed is a truth of sorts. In the film’s refusal to blindly accept Begg’s account an off-screen interviewer presses on him the inconsistencies in his story, and the questionable chapters: notably Begg’s willingness to live under the brutal Taliban regime. Yes, as it currently stands, Begg is innocent, but the film wishes not to absolve him. Has he seen something of the regime that we aren’t aware of? Or have we been brainwashed by Western propaganda? The point of the film is just as much about unpicking the constructed image of Begg as it is to undo Begg’s wrongful imprisonment.

Beggs time at Guantanamo Bay is retold through partial re-enactment, piercing music cues to subjectify Begg’s own experience, and his own verbal confessions. It’s uncomfortable viewing (and rightly so), as the film lays down the foundation for when those responsible will be outed as criminals. Begg’s own Nuremberg analogy is appropriate.

Any issue with this film would be it’s pacing, and lack of visual flair. It’s a standard interview-style movie that, even at the 95mins runtime, is a slog to sit through. In the filmmaker’s attempts to break up the monotony with archival footage, interviews with his father, and testimonies from character witnesses, which, unfortunately, only draws attention to the lack of dynamics on-screen.

In spite of this, it’s an important film to begin condemning the propaganda machine that perpetuated the rise of Islamophobia – The Sun anyone? – and the war crimes that has been committed on both sides of the political spectrum. The film wonders if we’re beyond the point of no return, but just like us, it’s unsure.