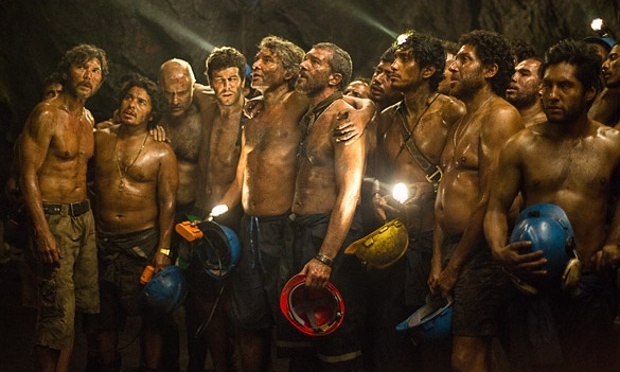 In 2010, the world became engrossed by the “Chilean mining disaster” in the Atacama Desert of San José, which saw thirty three workers become trapped underground for 69 days with limited food and water. Through global and social media, the world watched on riveted as days stretched into months and mining companies (along with the Chilean government) desperately devised plans to rescue the crew. But after several futile attempts, hope for their survival all but diminished.

In 2014, Pulitzer Prize winning journalist Hector Tobar penned an account of the catastrophe; Deep Down Dark: The Untold Stories of 33 Men Buried in a Chilean Mine, and the Miracle That Set Them Free, and now, one year later, comes the inevitable film version. Directed by Patricia Riggen (Girl in Progress, Under the Same Moon) and produced by Mike Medavoy (Apocalypse Now), The 33 follows Mario Sepulveda (Antonio Banderas) a Miner who assumed a more governing role after disaster struck the mines of Copiapó. Mario fought to instil calm and sagacity within the group, devising several escape plans, rationing food and actively promoting optimism despite odds of survival being massively against them. Frictions formed as hunger and desperation took hold of the men while friends, families and associates clashed and protested.

Several subplots are woven into The 33 for context but they also augment compassion as the story flits between the underground calamites and the events that unfolded above. The stellar cast also includes Juliette Binoche as the estranged sister of one of the miners, Gabriel Byrne as an intervening tycoon, James Brolin (in cowboy mogul mode) and Lou Diamond Phillips (great to see him back) as the sensitive supervisor of the entombed workforce.

Director Patricia Riggen enriches The 33 with a wealth of detail for a reputably accurate account, but too much information is superfluous to the script and stunts the flow of the narrative. Riggen mines strong drama and superb performances from the cast, eluding a stray into mawkish sentimentality, yet the action/ suspense scenes are stale and hewed with a lack of flair, which makes The 33 frequently feel like a made-for-TV movie and not always fitting to the medium.

The Miner characters are all affable and finely crafted. Their changing personalities expose greater complexities and considerable depth, as sensitivities are unveiled and emotional wallop vents to bolster the telling. Effective drama also unravels as tycoons strategize and politicians panic while pressure intensifies and a media frenzy erupts up above.

Riggen attempts to draw tension out of every anomaly when it doesn’t always aid the story or necessarily suit the scene, overemphasising the tiniest nicks in the plan to the point where it’s trying but for all the wrong reasons. While some of the facets serve our understanding of the crew and their chances of survival, there is an overabundance of background characters who, while in no doubt played an important part in the real life event, fail to effectively augment the film version. Comedy scenes work wonders amongst the calamity, and serene fantasy sequences compliment the darker tones.

Considering this is a story that is set primarily underground, it’s rarely monotonous and there are some excellently executed emotional moments amongst the expedition. These combine to make The 33 a hugely heart-rendering account of an infamous battle for survival with superb performances and humour at its core. Some of the action/ suspense scenes are fumbled and the story’s replete with superfluous detail, but strong drama and inherent humanity prevail to ensure that even the most hard-hearted of viewers will crack and blubber with a lump in their throats.

“You’re down to you last life…” New trailer drops for ‘Puss In Boots: The Last Wish’