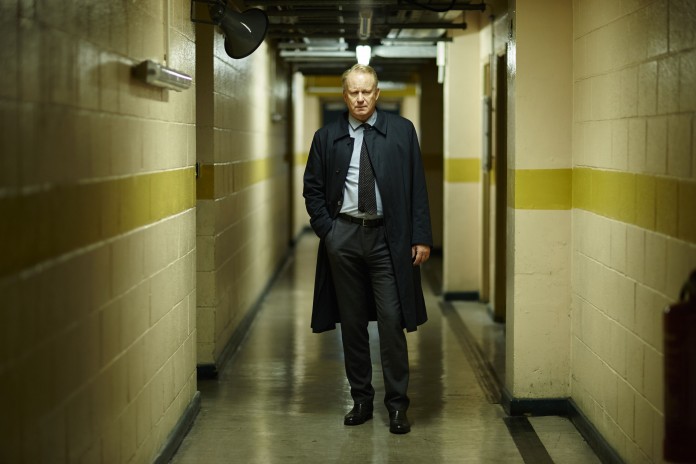 One of the most intriguing offerings from the BBC this autumn has been the atmospheric, alluring and puzzle-stuffed series River. This crime drama has quickly proved it is anything but rote procedure. Consistently drawing in warm reviews week by week – The Telegraph called River “superlatively creepy” – the show has become must-see viewing for the network.

Of course, the major coup for the series is that its eponymous brooding detective is played by an actor known primarily for his cinematic chops: Stellan Skarsgård. The solemn Swede teases out nuances in Abi Morgan’s maudlin script. Present in nearly every scene, Skarsgård runs the mother of all acting marathons as he embodies John River, a man searching for the answers to the death of his feisty partner, Stevie (Nicola Walker), while trying to regain his footing as a gritty East London detective.

In anticipation of River’s home entertainment release (November 30th through Arrow Films), we spoke with Skarsgård on his character, what makes River so different from other crime dramas and what its like to be so emotionally vulnerable on screen.

Crime procedurals seem to be so commonplace today and I’m just curious to know, for you, what sets River apart from the rest of the crime shows on TV today?

I’ve been offered quite a few crime procedural TV shows from all over the world and I’ve never been that interested in them. But most of all, I’m really bad at doing the kind of lines you have to do in those films, you know? “Download all the CCTV footage from the site” and all those kind of strange lines don’t mean anything to me. So, I’ve always turned them down. But when this script came in, it was so totally different. It was poetic, it was not really realistic, it was about all these humans that populated the series more than who killed whom. and that made it very interesting to me. So, I said “yes”.

During the pilot and you know right off the bat that, with those opening moments, this is going to be a different kind of show and in a really inviting way.

So I was curious to know: you’re reading the pilot script – you’re going through it – and what was the moment for you in the script where you said “This is it”? Was there a particular scene? A particular conversation?

No, when I read it, I wasn’t sure where it was going. It was like somebody was playing some music in the background and suddenly you hear something and you like it and you don’t know why you like it. You don’t know if the entire piece is good, but you like the tone of it. Very early on, from the moment it is revealed that his friend Stevie is dead. From that moment on I was hooked. Then, all those strange characters and all the beautiful poetry of it just bloomed. Of course, the script I read was not the final draft. A lot of things happened on the way. But it was the tone of it; it was Abi Morgan’s unique way of writing.

You’ve mentioned that actresses get to be these “open, emotional wounds” – they get to experience those depths, whereas men have to be a bit more tight lipped. For you, you got to put one foot in either camp. How was it experiencing that sort of emotional vulnerability?

It was sort of a new and daring thing to sort of open the floodgates in that way because normally you put the lid on. You feel all the feelings because men feel as women feel but just don’t show it as much. [laughs] So, it was a slightly embarrassing experience to just show everything. It was sort of a mental nakedness that was new to me.

Was there any freedom in that, to let that out?

Of course it was. The feeling of freedom to let it out once you get the courage together to do it.

Do you agree with the sentiment that River feels, as a character, like a different kind of detective? He lives so vulnerably on the screen. When we first meet him, he is in the wake of losing Stevie. Do you see him as a departure from a traditional sort of tight-lipped, staunch detective?

Definitely, definitely. But its also that there’s a reason procedurals are called procedurals. I am not that interested in, [for example], if you did a lot of films about butchers. Eventually you’ve seen how [they] chop up meat, right? I’m really interested in how the butcher feels. With River, of course, in reality he might have lost his job a long time ago but its the idea that it is possible for someone to be a good detective, having those psychological problems, being as vulnerable and seeing the human being…[laughs] to quote Jesus Christ: “See the man.” That is what you do, you know? I’ve always been interested in material that is about human beings. This is very much about one human being, or several human beings because all the characters are very nicely written.

What was it like experiencing an Abi Morgan screenplay? Can you tell the difference from female writing to male writing? Is there a different quality? Is it an emotional quality that is so infused?

It is interesting because I’ve read a lot of scripts written by female writers and many of them write men as badly as men write women. The men are very often reduced to sexual female fantasy just as men’s way of writing women are fantasies about women. But then there are some really good writers, like Lars Von Trier. He writes women’s roles that are extremely interesting, extremely complex and in many ways he really understands the woman he is writing about. [As for] Abi’s way of writing, she’s not writing a female sexual fantasy about a man. She’s writing about a human being and that is the core. Her ability to identify with River even if he is a man is what makes it so wonderful.

What for you is the main access point to understanding River from a viewer’s perspective? Is it his vulnerability? His loyalty to Stevie? His dedication to his job?

I don’t know and I don’t think you can fully understand him. But you can’t fully understand any human being, including yourself. The irrationality of everything is what makes us human. What you can do is identify with it. For six episodes you can see the world through his eyes and see how he deals with that. That is a journey that is interesting. It doesn’t mean that you understand him completely or what is happening in his brain but you can feel with him and you can become compassionate with his problems of being different.

Finally, is there a difference between shooting in a television capacity as opposed to a film capacity? If so, what are those differences that you’ve noticed over the years?

This is my first real venture into television. The speed you work with is shocking to me, of course. You don’t have as much time. I’ve done a film that we took five months to do an hour and a half. Here, we did six hours in five months. There are some conventions in television making that i don’t approve of: the idea of changing directors all the time and the idea of not finishing writing before you start shooting. Those things i think will eventually change more and more in television. When I started working with Richard Laxton [director of the pilot] on the first episode that set the tone, my approach to him was like if we were doing a feature film. We talked about the tone of the film, how to achieve the core of the material and what is it we have to have to make it work, because that is what you have to find first, and then you can have freedom around that.

River is released on DVD and Blu-ray on November 30th