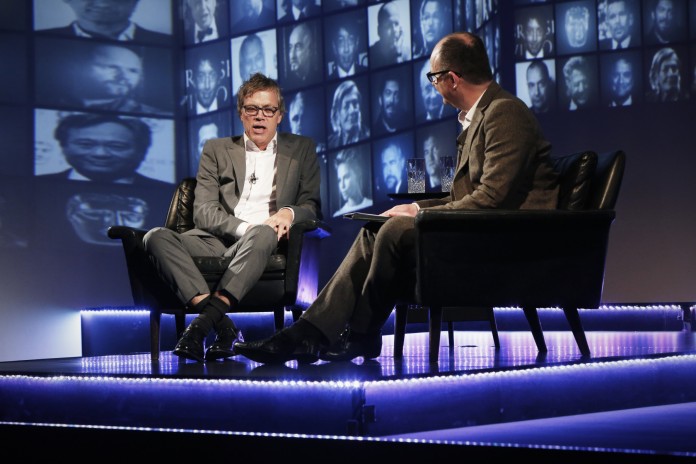 The highly-praised period romantic drama Carol (out in cinema today) marks only the sixth full-length feature in director Todd Haynes’ almost quarter-century career. It’s testament to the 54 year-old California-born filmmaker’s work that, while he’s hardly what you’d describe as prolific, it’s surprising that it’s taken until now for him to be invited to discuss his trade in the Life In Pictures series.

Gaining prominence during the 90s New York ‘New Queer Cinema’ scene, like his contemporary from the movement Gus Van Sant, Haynes has managed to breakthrough to a more mainstream audience without betraying his artistry and cinematic voice. His body of work is held in high esteem by many (and rightly so) and the films themselves are hugely distinctive and thought-provoking.

Talking to a clearly rapt audience of fans, the director first chatted about his early obsession with cinema, which began when viewing Mary Poppins at the age of three. This led to him remaking other films during his an adolescent, most notably the 1968 version of Romeo and Juliet which was achieved using his parent’s Super 8 camera to realise his ambitions (“that was the first film I sort of made as a kid and really put a lot of energy and production and obsession into, playing all the roles except… I even tried playing Juliet”).

Haynes gained early notoriety for a short film that was a biopic of the American pop singer Karen Carpenter in which he used Barbie dolls to portray the artist and her struggles with anorexia and bulimia. He was threatened with copyright infringement over The Carpenters song used on the soundtrack, and subsequently, the film has never been available to view public. It was only due to the excitement drummed up by a couple of prominent New York critics that it didn’t slip into obscurity, thus launching his career.

“All of a sudden my film was something everybody wanted to show around the country, because [newspaper] The Village Voice had that kind of cultural currency. And so to me it was all deliriously new and exciting and thrilling, and the film started to reach those outside of experimental film audiences, and I found that there was an interesting fluency and interest among different audiences for this kind of work. And it excited me, and I was like, Wow, that’s cool. I would like to keep doing this.”

Haynes’ 1991 feature debut Poison followed a similarly experiment path and was produced by famed US indie figure Christine Vachon. The film kick-started a creative partnership with the director which remains to this day, and it was his producer’s dogged attitude which enabled him to find the funds to make his second feature, Safe.

“I don’t know how that film would have got made without Christine. It was tough, and it took us two years to get the financing together. We needed a million dollars, and that was a big step up from Poison, but Christine just kept saying, “We’re going to get it. We’re going to get it.” I would have given up. It was her persistence, her conviction, her support, which has remained so seminal to our relationship all these years, and so really my entire career is down to Christine’s tenacity and perseverance.”

Safe also marked the director’s first collaboration with Julianne Moore, whom he clearly has a lot of affection for.

“The thing about Julianne, which is also true about [Carol star] Cate Blanchett and many of these incredibly courageous actors I’ve worked with, is they know how to keep a certain distance from the viewer. They don’t have to gain your trust or they don’t have to be likeable, there’s nothing obsequious about the way they address the viewer in the films.”

1998’s Velvet Goldmine, Haynes’ blistering homage to the glam rock era, was the first of his films to showcase the astounding work of Academy Award-winning British costume designer Sandy Powell, who has since gone on to work with Haynes for his 2002 feature Far from Heaven and Carol. He was asked about his working relationship with Powell.

“I think [Sandy] loves it that I care about all those details, I think it means something to her. It’s true for every creative department that I know of – production designers, costume designers, DPs – I think everyone wants to feel that they have a foundation that they’re on, that there’s a strategy and a language.”

I’m Not There (2007) was arguably Haynes’ biggest narrative challenge to date. A loose biopic of Bob Dylan, the director used six different actors (Cate Blanchett among them) to portray fictional characters representing the musician at various stages of his life and career. It’s was the kind of production which having the rights to Dylan’s music was an absolute necessity. Having previous failed to get David Bowie onboard for ‘Goldmine’, Haynes talked about the trepidation in getting Dylan to support for film.

“I thought there’s no way to do fake versions of Dylan songs, without getting the rights. I went to him through his manager Jeff who said, “Just write out [your proposal for the film] and don’t mention things like ‘voice of a generation’, and don’t say genius.” I wrote a description of the concept – sort of how lugubrious and un-commercial it was – and sent it to Bob with my movies which he took in his trailer at some point and watched, I assume, because he likes weird movies and art films and stuff. A month later we get a call from Jeff saying, “Yeah, you got the life rights and all the music.” And basically it was this huge gift.”

Finally talk turned to Carol where Haynes discussed how the development of a project from conception to screen requires many changes along the way.

“Every stage of filmmaking is a process of discarding everything you expected it to be and trying really, really hard to look at what it is, because it’s always little different and you have to allow for that you know. And so what you see on set is different from the script, and what you see in your dailies is different from what you saw in the flesh, and the dailies are not the same as the first cut, and then you learn how the cuts start to play with showing people the film. And so each, you just have to be sometimes ruthless with yourself and you have to let your favourite scene go because it isn’t supporting the whole experience.”

The brief audience questions did manage to throw up one interest reveal by the director regarding his next project.

“The next film I’m hoping to make is called Wonderstruck and it’s based on a Brian Selznick graphic novel that he made for young people. He wrote Hugo Cabret, which became Scorsese’s Hugo. And I’ve never made a film for younger audiences, and it’s carried by three twelve year-old kids basically, and it’s another love letter to a city, in this case New York.”

A superb evening in the company of a genuine artist and iconoclast, BAFTA’s interview session proved as insightful and inspiring as ever.