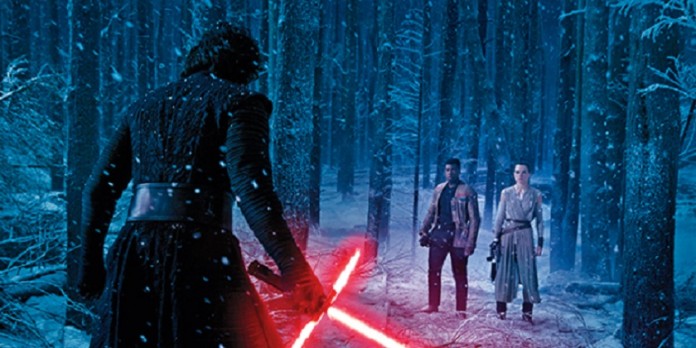 This week the lights will go down in a thousand cinemas across the world and the imaginations of millions of people will be fired once more. Star Wars The Force Awakens is exactly the Star Wars film fans of the saga have wanted to see since 1983, and this is the film’s greatest triumph and the source of its problems.

To be clear – this review won’t contain any specific spoilers – the film deserves to drop its cloak of secrecy in its own good time. If you’ve managed to avoid the secrets of The Force Awakens you’ll enjoy it so much more.

The old magic is there, and the potency of themes of the original trilogy are as propulsive as ever. Destiny, the discovery of the self, taking a stand against the past – all of these are as natural to Rey and Finn as they were to Luke and Leia. Abrams and Kathleen Kennedy have done a fine job reintroducing us to the world we loved, tying up some loose ends, and throwing us a whole heap of new questions. You love Star Wars? They know.

What immediately strikes you is how strongly J.J. Abrams plays to his audience. He has a specific job to do: introduce new characters into a familiar world and give us,  above all else, a fun Star Wars movie. He does this with an assured hand, The Force Awakens feels like Star Wars, and is redolent enough of the first trilogy without troubling the fourth wall in any way. Fans will be enraptured with the reverence paid to their favourites.

At its heart The Force Awakens is a simple story, told quickly with some wonderfully funny moment with some great dialogue. The exchanges between Finn and Han in particular are fueled by bravado and foolishness – Lawrence Kasdan’s hand is felt very strongly here. Daisy Ridley’s scavenger Rey has a lot to do early on in carrying the film but only when she meets Finn do the two actors get into their stride. Both are well served by a generous script and given moments to shine. They are our new eyes in this old world, and their sense of wonder and discovery are as our own.

Standing in the shadow of Darth Vader and the Empire was always going to be a tall order, however Adam Driver’s Kylo Ren sets the tone nicely as a fierce, conflicted villain. He is unmasked literally and otherwise early on in the film and his character’s narrative is all the more foreboding for it. The threat is real – the First Order are extremely menacing, and while Domhnall Gleeson occasionally licks at the scenery he never takes a bite and Andy Serkis’ Snoke – well, that’s one to experience for yourself.

Occasionally the ship steers too close to the familiar. The action is often pushed back to favour the characters and their relationships; sometimes it is pushed back too far. There were moments when the set pieces felt a little small, though you are always invested in them. Watching X-Wings dive through a planet’s atmosphere to face off against a swarm of Tie Fighters is exactly as fun as it should be. But it is to Abrams’ credit that the fights are always worth something, particularly towards the end of the film.

What works is that Abrams has set The Force Awakens in a world which reveres the events of the first three Star Wars films as much as its audience does. This allows for some narrative suspension of disbelief and the small sag midway through the film as our eyes adjust to the new star in the sky. The blending of the old and the new are evidenced perfectly by John Williams’ soaring music, which peppers the new character themes with hints of the familiar.

Watching it is a strange experience. We are tentative at first (the shadow of the prequels still looms large) as the world is built and then you find that the ground beneath your feet is firm. The designs, the dialogue, the confidence with which the film begins and ends are breathtaking. There are moments which will touch the hearts of Star Wars fans, moments which reward their faith long held through dark times. Abrams has made a very knowing and a very clever film.

In some ways The Force Awakens is the opposite of A New Hope. That film opened relatively small and was carried by fierce word of mouth. This film has been three years in the making, creating a wave of enormous hype which has crested with this film. However the fact that this is the first film in a new trilogy means that there isn’t the same sense of triumph come journey’s end. There is more to come, and those wanting a sense of catharsis will have to hold their breath for another 18 months.

The Force Awakens is a cultural echo, a step-child of the blockbuster era which begat it. It is a film which delivers on almost all levels but which is merely a tease for things to come.

For the fans there are those moments of pure pleasure; Abrams knows well the power of the force he is wielding. The long imagined moments are here, old friends reunited, the air rings with familiar sounds. The magic remains. The power holds firm.

We’ve moved into a new galaxy with The Force Awakens. It is recognisably Star Wars but with enough of its own character to enable the next steps to be bolder. It’s the best new Star Wars film in three decades and one of the most satisfying films of the year.

Believe the hype, my friends, Star Wars is back.

Win The Last Duel on Blu-ray™