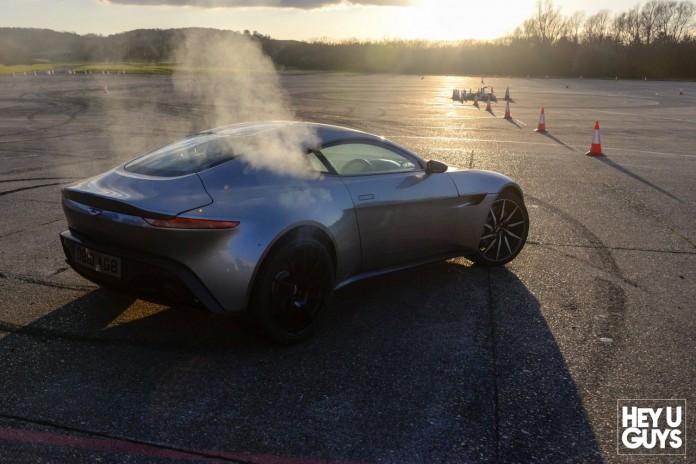 This week HeyUGuys were invited along to Millbrook Testing Ground, Bedfordshire, to see first hand some of the Aston Martin DB10s which took part in the filming of the latest 007 encounter, SPECTRE.

I’ve been to test tracks before, both to be driven and be a driver myself, but with this one, I had little clue what to expect. After all, Bond is Bond…

20th Century Fox and Aston Martin treated us to a day of superb driving experiences, first warming us up with some of their current fleet. Within minutes of arriving at the site (its huge, by the way, and shrouded in secrecy given the models they’re testing), I was offered a seat at the wheel of their Vanquish Volante. They took me to the “one mile straight” and asked me to accelerate, well, in a straight line for one mile. 164mph if you’re asking – more than twice the UK road limit.

Next up was the Vantage V12S around Millbrook’s “high speed bowl”. A perfect circle of 5 increasingly banked lanes over a 2 mile lap distance. Track top speed here was 130mph but the real fun was in balancing the car to neutral steering. Achieving the optimum speed, the car holds its road position without any input to the steering wheel. A squeeze of the throttle and it drifted right a lane; depress the accelerator, and it maneuvered itself to the left… all at eye watering speeds. It’s not often (ok, never) that you’re told to place your hands on your knees and drive 4 miles at 130mph without a single touch to the steering wheel.

Now for the Bond connection. A switch to the Vanquish Coupe, which like the others comes powered by a 6 litre V12 beast of an engine, and over to the “Alpine circuit”. 007 aficionados will remember the scene in Casino Royale where Bond, in hot pursuit, dodges to avoid a helpless Vesper Lynd lying in the road and rolled the car down a hill. A World Record breaking 7 rolls for the stunt driver, and a huge dent in the tarmac thanks to a battering ram which was literally cannoned out from under the Aston to send it rolling.

This course was designed to test our cornering and hill techniques – and indeed we had a lot of fun doing that – but we also got a good look at the aforementioned hill (and re-laid tarmac, which apparently was the result of a lengthy debate as to who should fund the repair)!

It’s said they keep the best til last, and this was oh so true today. Two DB10s (of only 10 ever built) had spent the day being driven around a course laid out in front of us. My turn for these came after a deliberately light lunch. First up, a car with a big difference. They call it the “pod car”. A pod with a driver on top, and the car (as ‘driven’ by Daniel Craig for the film’s Rome car chase scenes), underneath.

I got to interview Neil Layton who designed and built the pod modification, and Rob Hunt, the stuntman who drove this most unusual of props through the Rome streets.

Last of the day was, without doubt, the pièce de résistance. Mark Higgins is Daniel Craig’s stunt double when it comes to driving expensive cars in the last 3 Bond outings. I interviewed him about the stunts in Spectre and asked if he was tempted to put a bid in for the auction of the only DB10 ever sold… it reached £2.4m last week!

Mark took me out on a section of rally style track, followed by the slip and sliding of a cone chicane on the flat. The car had clearly undergone significant modification for the filming, including the dash board being underneath the glove box, ignition and other key functions via various boxes of wires floating around, but most curious perhaps, a large upright lever acting as a handbrake. Exactly what Mark needed to be able to override the car’s automatic handbrake and drift the car violently at every turn. I was suitably thrown in every direction as Higgins skillfully pushed the multi-million pound machine to its absolute limits.

Pumped full of adrenaline and just a bit envious of the pros who get to drive these Aston Martins as a day job, it was time to head back and sit down to the new Spectre Blu Ray, and see just how well they made these cars come alive on the Rome streets.