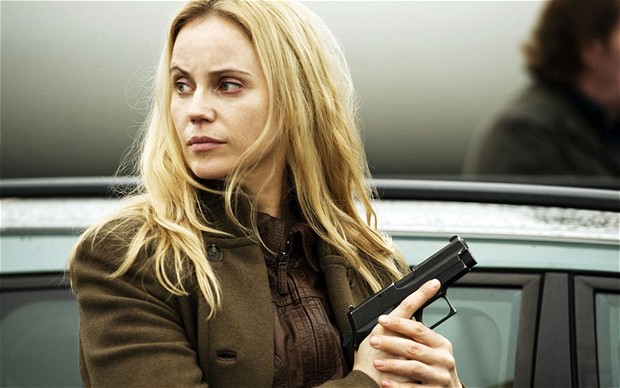 Saga Norén returns for a third series of the Bridge, but this time without her partner Martin Rhode. Sofia Helin spoke to us about what to expect from her character, emerging once again from this award winning dark, cross-border crime drama.

Swedish police detective Saga Norén takes over once more with her powerful, assertive yet unexplainable attitude. The third series opens with a double bill, and of course, dead bodies with an investigation underway. Similar to our shock in previous seasons, the first episode begins with the discovery of a corpse painted with ghoulish red-joker smiles, and by the end of episode two there had already been two murders, gun fights, and a kidnapping. All of this leads Saga to join forces with a Danish colleague, though when you remember that she put her previous partner, Martin Rhode (Kim Bodnia) in a 10-year prison sentence for a murder she reported, it’s compelling to see how this new partnership with Henrike Sabroe (Thure Lindhardt) pans out throughout the series.

Playing such an intense and demanding role isn’t easy and during our interview with Helin, she described her character to us as, “A very lonely person, who is very good at her work. As good as she is an investigator, as bad as she is in any relationship.”

Her socially unexplainable behaviour comes down to what Sofia interprets as Asperger’s. Though the screenwriters have always been careful not to categorise her character into one specific mental health condition.

“To me, she has Asperger’s. When they wrote her character, they did so without any social skills. This is something we agreed on once the series went on.”

It is also worth mentioning that Saga’s classic move, which is to strip down and get changes in the middle of the office, reappears. “For Saga, it’s not a problem, for me, it’s more of a problem”, Helin laughs. This may be yet another character ploy to show Saga’s struggles in understanding social norms, the ability to strip down to her underwear without embarrassment around the company of men.

Playing such an empowering and dominant role can only bring the ‘f-word’ into account. “I always explain to people who ask ‘why do you call yourself a feminist? It’s such a bad word. But then I wonder why is it such a bad word? Why should we hide the fact the world is ruled by men?. It is also about letting man be as weak as he needs to be.”

So does her character set a good example for young females? “She’s not typically Swedish, she’s typically… her. She’s odd. It’s not something I aim to do when I’m playing her, but when I hear that some people see her as a feminist role model, it makes me happy.”

Given the role of her character, what can we expect from Saga Norén in series three? “I found this season exhausting in playing Saga, especially since this season is so sad,” she continued. “This series is about family, it’s about who is your family and who isn’t. Responsibility is a theme here too, who is responsible for a child?”

So far, there have been a lot of questions concerning Saga’s family, but without giving too much away for those who are not watching at the same pace, these questions begin to be answered.

“There is a scene where I as an actor, playing Saga, was overwhelmed by my own emotions. We see this, but I don’t think people will know just how affected by it I was.”

The production values also play a key role in this series, from carefully crafted camera work, to atmospheric soundscapes that heighten the intensity of the narrative. Series three of The Bridge gives us well balanced characters, and does not stray too far from keeping us on edge.

Winning the double at the C21 Drama Awards, It’s not hard to see why The Bridge won best returning series, and why Sofia Helin won best female performance for her performances. With the same strong creative team behind her, this can only push the third series into bigger depths. Also winning best returning series, The Bridge takes viewers into the darker human psyche of crime. Be prepared.

Watch The Bridge, BBC4, Saturdays at 9pm and 10pm. The Bridge Season 3 and Trilogy Boxset are available on DVD and Blu-ray on December 21st.