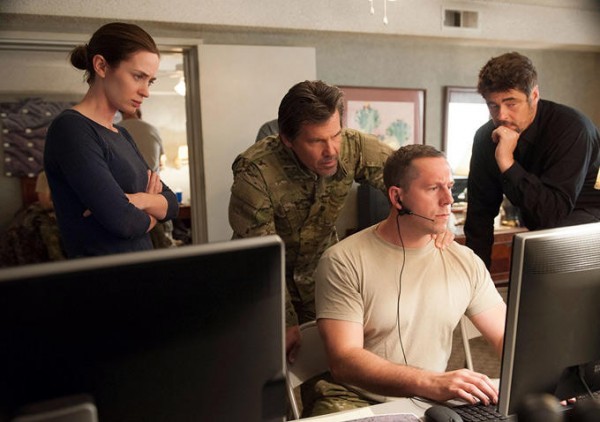 Canadian director Denis Villeneuve has provided some angst-ridden moments in previous outings with Enemy and Prisoners. He arrives on the Croisette with Sicario, a tense and booming thriller about the drugs war in Mexico and the USA.

Emily Blunt stars as Kate Macy, an FBI agent headhunted by an elite force to crack the ring of major drugs players over the border. In charge of this elite force is Matt (Josh Brolin), a flip-flop wearing tough guy, and Brolin revels in his role. Looking like a camouflage-clad surfer, Matt is at once both endearingly funny and laidback but ruthless in his determination to hit his target.

Aiding Matt is the mysterious Mexican Alejandro (Benicio Del Toro), a bulky and sinister presence. His role is unclear, but we quickly learn that he has suffered a huge tragedy and that he, like Matt, is prepared to take any steps to defeat his enemies. Kate discovers that playing by the rules is not always an option and she is gradually sucked into a dangerous and violent game of cat and mouse with the drug cartels.

Villeneuve creates some masterful visual strokes, the vast desert landscape aching for wide shots of incredible sunsets and dawns. In a nice touch, when the convoy of cars heads off on a dramatic mission, they literally move towards the eye of a storm. In another scene we see Kate and a soldier on a rooftop, watching the gunfire just across the border in Juarez, a deadly and terrifying firework show.

But it is the sound that works so well at depicting the ominous; Tom Ozanich, who did such great work on American Sniper and Birdman, has filled the film with booming tones that heighten the anxiety-drenched atmosphere. The task force’s first trip across the border to Juarez to pick up a drug baron and extradite him to the US is a brilliant cinematic moment of heightened tension.

If there is one quibble it is that Kate is such a naïf. Surely an FBI agent working in the treacherous and lawless border area, a woman who has seen her share of horrors, shouldn’t be so surprised at her government’s decision to throw away the rule book and start playing dirty. It is also a shame that she is virtually the only woman we see: no other member of the group, whether FBI, CIA or Marine, is a woman.

While dramatically this heightens her isolation as a moral figure, it is a little tired, recalling films going way back to Courage Under Fire or the more recent Zero Dark Thirty (which at least had the presence of more than one woman). Nevertheless, Blunt more than stands her ground against the two behemoths Del Toro and Brolin, who are both outstanding.

While not as successful as Traffic, which also starred Del Toro, this is a booming, blooming brilliant film that maintains the tension from the outset and is not afraid to break some rules.

Dora and the Lost City of Gold Review