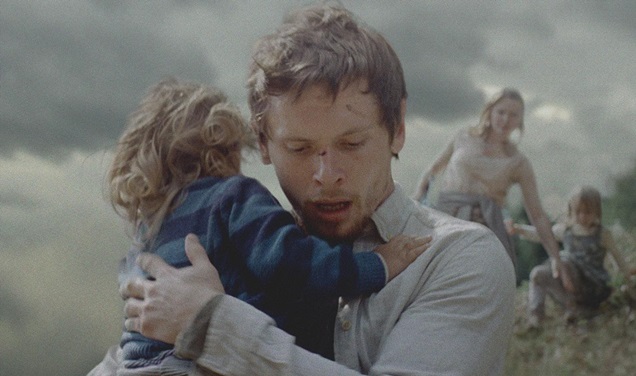 At first glance, we appear to be delving into the life of a normal family, waking up early to depart on a vacation. That familiar rush of feeling utterly exhausted but excited to get away from home consumes the viewer as this relatively young couple get their children out of bed. The recognisable face of a bearded Jack O’Connell plays his part in the household; desperately trying to cling onto something as this living room spins out of control, with giggles and siblings stealing toys from one another. Rallying the troops into the car with copious amounts of luggage, what appears to be an enjoyable getaway develops into something so much more spine chilling.

Writer, director Daniel Molley has had his fair share of success on the festival circuit with latest short Home and quiet rightly so. He cleverly throws us off course with what appears to just be some quality family time away; before Home turns into a disaster of a ride. For a split second, it is easy to get confused, in fact not knowing is what is fuels this short project. As this family meets a shady group of people and allow their children to be stuffed into a car boot as well as themselves, things take an unexpected turn, flipping the coin as it were on British citizens trying to smuggle their way into Europe.

O’Connell plays a protective father, trying to shield his family from what is happening, what is perhaps about to happen. As they wade through a war-zone with thousands of other people, only to see them reach a full to the brim camp which makes you wonder what was so bad that they left their previous life behind for this squalor. As the final scene draws to a close, the last frame doesn’t quiet give us the answers we were hoping for, but leaves you pondering. As flashes of a Radio news report at the start resonate, we are given a morsel of information as to why this family is fleeing and thus highlights the pressing controversial matter of refugees and immigration at the moment. Thinking why they put themselves through this; yet it is probably the same reason why many people fleeing their own countries do it – for a better a life, to escape from the dangerous environment that was once their home. As haunting thoughts of this not being so far from the truth dawn on you, this script does a lot in its mere 20 minutes. Home places a very different twist on a crisis that currently has the world up in arms.

It’s raw, tough and hard to watch at times, yet this is altogether very human and extremely natural. That surge of excitement we all initially felt quickly subsides. Home succeeds not only in providing a good short; but after viewing this film it’s guaranteed to be in your thoughts for days after, lingering at the back of your mind – which deems it something of a success.