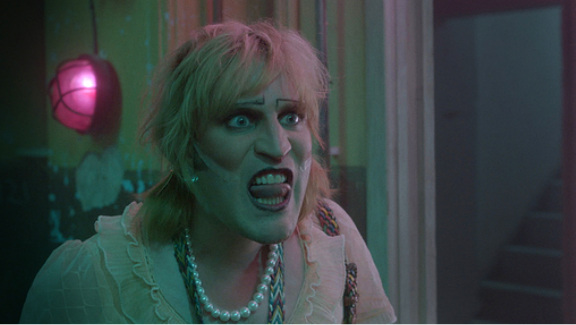 Visually enticing with solid special effects and an enchanting score, this dark, comedic fantasy from Ben Charles Edwards is a fun, if insubstantial, romp through a dystopian East London. The Thames has become an imposing presence, having swallowed up huge swathes of London already, and is still encroaching into the dank alleys and grotesque nightclubs that remain in the foggy city. The moon and stars always loom overhead, cartoonishly large and bright, the last bit of natural beauty in this depraved and gaudy future.

Pensive piano player Art (Michael Winder) and wannabe sailor Sal (Max Bennett) meet at a party organised to entertain the repulsive and commanding impresario (Gerard McDermott). The two are instantly drawn to each other when it becomes clear how hopelessly out of place they are amidst the debauchery of the other guests. As their relationship develops, they hatch an ill-conceived plan to travel to Egypt, intending to support themselves with Art’s music and Sal’s dancing. We see very little of either talents. The only evidence of Sal’s dancing ability comes in the form of a few seconds of waltzing which he claimed to have learned in the brothel where his mother had worked.

The meandering plot never really manages to get off the ground, it’s more a series of interconnected events than a single cohesive story. The fact that the film is never boring is a testament to the whimsical beauty of Sal and Art’s adventures, but it’s unable to live up to the dark and desperate world in which it’s set. The atmosphere lies somewhere between a non-musical Moulin Rouge! and the lesser known (and yes, less impressive) Repo! The Genetic Opera. It’s just as appealing visually, but lacks their strong concepts and energy.

The supporting cast of impressive British talent, however, manage to make up for the slow pacing. They’re all fascinatingly eccentric and fleshed-out characters that exist to contrast the relative normalcy of the two stars, be it the powdery and disapproving fortune teller (Sally Phillips), the haggard, lustful landlady (Sadie Frost) or the jaded and sickly magician (David Hoyle). Fans of Noel Fielding who’ve grown up with his work on The Mighty Boosh will be happy to see him in fine form in a small but delightfully bizarre role as the semi-famous, cross-dressing, drug addled prostitute, Dickie.

Unfortunately, these performances manage to outshine Winder’s and Bennett’s so much that you’ll find yourself wishing they had less screen time so that the lives of the others could be further explored. Ultimately, the curious world of Set The Thames On Fire is let down by the tale it chooses to tell.