Home Features On The Set Of... 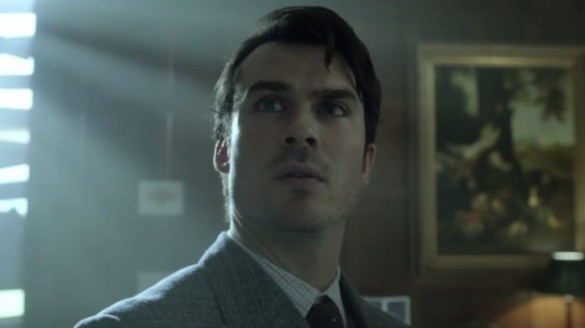 In the blisteringly hot mid-summer of 2013 HeyUGuys were whisked away to a warehouse in East London to see one of this summer’s big British films, Noel Clarke’s The Anomaly, be shot. As soon as we walked into the warehouse, all sunshine was lost, and we found ourselves in a garish corridor, deep reds from floor to wall, and windowed booths every other step. This, apparently, is part of a brothel set on the sci-fi film’s shoot, and is being used at this point to house crew and cast between takes in a bedroom just far enough away to barely hear the dialogue being shot, but the punches are clear. Just to check, I asked Noel Clarke if this is in any way a family film. “No, 100% no. Have you seen any of my films that are family films? Except maybe Fast Girls.”

Another take and from the video village we could see a big chunk of man bringing the pain to Alexis Knapp, Noel tells the man to ‘hit her rougher’, he does. I mentioned this to Knapp, “I didn’t hear that one. That must have been something they kept out of my ears. I told them, ‘go ahead, grab the back of my head, it’s cool’. The thing with Mike Bispring though, top 5 MMA champion in the world, so he’s the only one I get nervous around. The dude’s a warrior, and he actually clipped Noel on accident. Almost knocked him out, and also can’t really close his jaw.”

Noel all day is covered in blood, his costume and his arms, his face, bruised and bloody. “I’m getting quite beaten up. [pointing to some of his bloody make-up] That’s normal, that’s not normal… These are real.”

When asking exactly what The Anomaly is about, however, everyone plays it close to the chest. From Knapp’s perspective, “A very lost, sad, depressed woman who really has nothing to live for and when she meets Ryan, Noel’s character, she and him go through this insanity together, he’s the only glint of hope left in her life. They save each-other throughout the film.” Clarke as both lead and director looks beyond plots and adds “This film is about control, really. Essentially the film is about control, who has control, who wants control and why they want it. It’s really about if you don’t take control of your life, life will eventually take control of you. And that’s the basis of what happens in the movie, a guy wakes up in a van, he doesn’t know how he got there, and realises that even though he’s going to save the kid, everything is not how it seems.”

Mid-way through talking to Clarke, he pulls out his phone and proudly presents a fight scene already done, at this point it has been posted online as part of the film’s publicity in much the same form that it was on set, and we see a single take with slow motion and normal speed playing about, Clarke fighting lead bad guy Ian Somerhalder. The first thing to notice is that unlike a lot of recent action films the fighting is clear, and the camerawork is steady, precise. “It’s quite composed. We don’t tilt up and down. You can’t compete with a Jason Bourne fight, we don’t have the money, so how do you make your fights different? You choreograph them like a dance and you do them in one take, which nobody is doing. I feel like a lot of people have a lot to say about the things I do because a majority of it is successful and that seems to grate a lot of people up the wrong way, so for me it’s time to stop making films and show that I can make a film. Three films came out last year of which I wasn’t the sole producer, the sole writer, the sole actor, but they all get attributed to me. Everyone says ‘this is s**t’ because I may be the most high-profile name I get the blame. So I’ve got to stop making films and make a film.”

Ian Somerhalder gave more on the fighting, “That fight scene, we didn’t have that much time. We had enough time, a little bit of time to rehearse it. It’s a minute, plus. No cuts. Full contact, no cuts. We were padded, but it was full contact… We don’t want to rely on big effects. We just want to try to get to the heart of what’s happening here. Noel had a vision to make it happen, and he did. It’s crazy because when you watch the fight, the take, it’s not a cut, it’s just a take. So watching it was really cool. It was painful at times, but anything worth doing is worth taking a little bit of pain for.”

Noticeably on Ian Somerhalder’s IMDb page he hasn’t done many films in his down-time during summers when The Vampire Diaries wraps for the season, he explains “I haven’t done a movie in a very long time, since I’ve been doing The Vampire Diaries I couldn’t find the right one, and it was really important to me to find the right one.” The right one being a Noel Clarke film. Somerhalder sings the praises of Noel as a director, “I’m really grateful that Noel is very giving with his information and his experience. I don’t come at it from a neophyte standpoint, it’s what I do, I live on sets, but shooting a movie always is about time and money. How much of each one of them do you have? And on this one, not much, so Noel and everyone have been unbelievably crafty and professional in getting what we need. Some movies that have so much time and so much money come out crap, and some times when you don’t have a lot of either one of them you make it happen. I’m confident that we’re going to have a good film.”

Clarke’s take on being an actor’s director “I think because I’m an actor, I come from that environment. I know what they need and how to get them where they need to be performance-wise… Just pulling the emotion out of them. Taking the key moments, seeing where the emotion is and making sure we pull it from the right places at the right times, and if they’re not understanding why they’re saying a line like this, saying ‘this is what has happened to you, this is why you’re saying it, this is why you’re saying it to this guy and this is the reason you are saying it’ and when you do that, you say ‘take all that and put it in here, and say the line whilst thinking that’ you get the performance. Hopefully that comes across.”

Throughout the hot day Clarke would see everyone on set, cast, crew, journalists, PRs, producers, everyone, and make sure they were happy, they were good, things were going well. It seemed to bring the energy of everyone up high when it could easily have been dragging low. A pretty impressive spectacle. I inquired about how Clarke is perceived by many young people in particular with great regard, the respect he gets from people and the respect that he gives out. “I get a lot of support, I’m thankful for that. What makes them support me is what makes a lot of the industry dislike me. It’s because I’m a regular guy, and people relate to that. A lot of the industry is like ‘f**k this guy, why is he still here?”

As we left the comfort of the brothel set for the day, Clarke prepping for shooting long into the evening, it was clear that the shoot at the very least was going well, that whatever The Anomaly turned out like, those on set were having a pleasant time, and Clarke as a director really was giving it his all, not only with boundless energy but with genuine vision to the proceedings. “This, for me, is me wanting to get behind the chair again, stop having people do things that might not be great and they can walk away and say ‘actually, even though I directed it, we can just blame him’. But, you actually directed it mate.”

The Anomaly is in cinemas from July 4th.