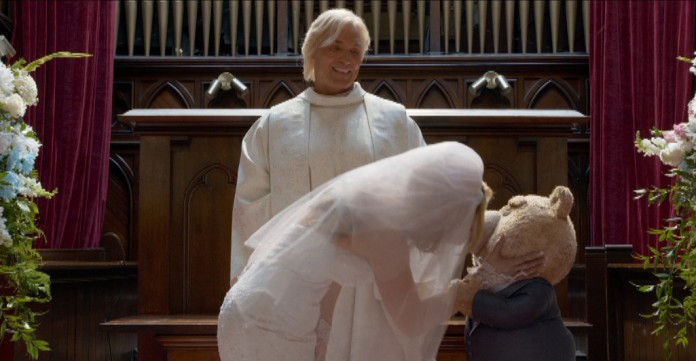 Seth MacFarlane’s Ted did something for Sam J. Jones (aka: The Man Forever Known as Flash Gordon) a couple of years back which would have previously been deemed impossible – namely to put the then 58 year-old actor firmly back into the pop culture consciousness.

His small but hugely memorable part in that surprise box office hit was a warm and welcoming blast of nostalgia for those legions of Flash fans out there, and MacFarlane was savvy enough to include Jones once again in his sequel (the imaginatively-titled Ted 2) which is now out on DVD and Blu-ray.

We spoke with the actor during his promotional rounds for the first film three years back, and we were lucky enough to be offered the chance to catch up with him again this week, where we learned that Ted 2 isn’t the only project in which he’s been involved with recently.

HeyUGuys: Did it take any coaxing for you to reappear as ‘yourself’ in Ted 2 or were you more than happy to jump back onboard?

Sam J. Jones: I was really excited when I got the call about the sequel. I remember when [Ted director] Seth MacFarlane called me to talk to me about appearing in the first film. He talked about seeing Flash Gordon as an eight year-old and how it completely changed his life. He wanted to get in the movie and TV business from an early age and Flash was his first major inspiration to do that. I was more than happy to appear in the second film.

Have you gained a new fanbase from appearing in the films? Do you get Ted quotes yelled at you now rather than Flash Gordon?

I get both. There’s a whole new generation who now know me from the Ted films and I get a real kick out of that. Their dads are the ones who shout things like “Gordon’s alive?” which I still think is just wonderful.

Speaking of which, BAFTA are holding a Flash Gordon: 35th Anniversary Celebration this week in London. I understand you’re attending?

I’m really excited about Saturday night. It’s gonna be a blast. Lots of the original cast will be there; Melody Anderson, Brian Blessed, Peter Wyngarde. BAFTA are giving us the red carpet treatment and then there’s a screening of the film followed by a very special Q&A and the opportunity to meet fans. Melody and I are then travelling across to Wales for a Comic Con there, before I head to another in Germany for a couple of days in early December. I’m also being filmed throughout for the documentary Life After Flash.

How did this crowdfunding project come together? Have you been involved from the start?

Yeah. We started in January of this year. I did a UK celebrity reality show early last year which involved ski-jumping [Channel 4’s The Jump] but I had to drop out early on due to a shoulder injury. I think the majority of those who entered the competition had to call it quits after hurting themselves (laughs). Life After Flash’s director Lisa Downs had some associates who worked behind the scenes on the show and that’s how we connected.

When it was pitched to me I got so excited about it. Because the film is funded through fans and not a studio, we have full creative control. We’re not under any pressure and Lisa wants to get everything she can about my life, so there are really no limitations on what she can film. Fans will learn about the challenges I’ve faced in my life as well as the successes. Seth [MacFarlane] is one of the many contributors in the documentary.

You’ll obviously be watching Flash Gordon at the weekend, but is it easy for you to sit through the film now, 35 years after making it?

I don’t have a problem seeing it now. I think I’ve only watched it a total of eight times in my life. I’ve done around 50 films and I’ve only watched those once or twice. I have a pretty big family so it’s difficult finding the time to revisit my work, but I’m very excited to see the Flash on the big screen again. I still think it holds up.

Could we move away from Ted and Flash Gordon and you talk a little bit about how you founded your private security firm [Inner Cordon Inc]? What brought you into that specialist trade? It’s a fascinating flipside to the career you initially set out in.

Well, I was actually a marine before I had a career in the film industry, so it was more of a natural transition. I help run cross-border security operations into Mexico. I look after big corporate bodies and VIPs. I’m very hands on and I’m sub-contracted by larger companies to provide protection and safe border crossings. I live down in San Diego which is very close to the US Mexican border, so I can come and go as I please. If any of the movie stuff comes up, I can drop everything and either do a film or visit a convention.

Have you ever felt your work in this industry has been compromised because you are still recognisable from your screen stuff?

That’s a good question. A couple of years back I was doing business with a VIP and he only discovered my background in film a month or so into the contract. Thankfully, he was happy with the service he’d received but he did mention that if he had known of my other profession when he first signed up, he would have been a little wary of hiring Flash Gordon (laughs).

Ted 2 is now available on Blu-ray and DVD