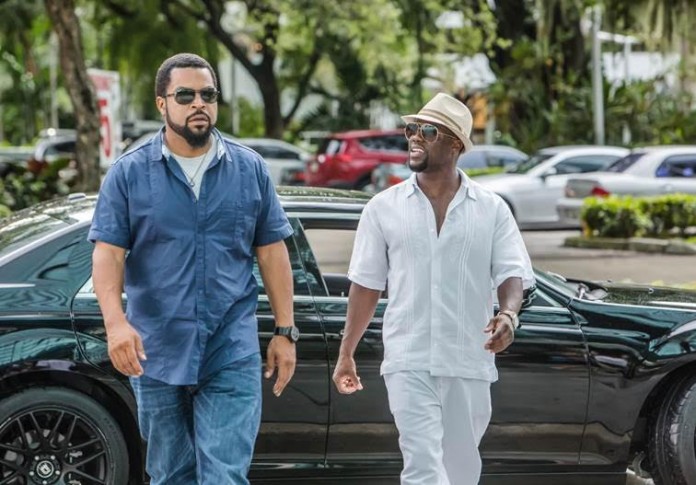 As the old saying goes, “If it ain’t broke, don’t fix it”. For director Tim Story and producer Will Packer, you can’t exactly begrudge them abiding by this notion when it comes to the Ride Along franchise, as the first film worked wonders in the box office, topping the charts for consecutive weeks amidst the award’s season. So financially this is sound advice, but creatively, it’s simply not good enough, as a sequel that is suffocated by its own lack of ingenuity.

Reprising their roles of rookie policeman Ben Barber, and hard-nosed Detective James Payton, Kevin Hart and Ice Cube return as good cop, bad cop, respectively, as the former builds up to his wedding day, to Payton’s sister Angela (Tika Sumpter). It’s the week leading up to the big day, and Barber is determined to prove his worth as a law enforcer, and convinces his soon to be brother-in-law to take him to Miami to assist in a case involving a local drug dealer. Though on their arrival they realise there’s a lot more to this story than meets the eye, as they encounter the eccentric computer hacker A.J. (Ken Jeong) and the shady, vindictive businessman Antonio Pope (Benjamin Bratt). With time ticking and Barber knowing he needs to return to Atlanta by the weekend, they need the help of policewoman Maya (Olivia Munn) whose local knowledge could be key in them cracking this case before it’s too late.

The tried and tested dynamic between the leading pair is exactly the same, again, and while they have a remarkable chemistry, it’s a shame not to see any progression or development. The same applies for the narrative, following the exact same formula, and all the same beats as the preceding endeavour. The whole point to the last picture was the idea that Barber wants to marry Payton’s sister, but the Detective is determined to prove he’s not good enough to enter in to the family, allowing him to team up on a case merely to highlight his inefficiencies. This has an identical premise. The wedding hasn’t even occurred, in spite of the year long break between the pictures.

Hart’s sincerity is a saving grace however, though when Maya asks, “he talks so much – how does he breathe?” you do wonder how he’s quite capable of this act, performing alongside Ice Cube like an excitable puppy would when welcoming home an owner after a day’s work. Meanwhile, the decision behind the Miami setting becomes increasingly patent as we progress, as you realise that this tale takes place on the Florida coast merely so we can fill time with superfluous shots of bikini clad women just wandering around, which probably takes up about a third of this movie.

Unlike the first, though, there’s no scope to the narrative implications, as a by-the-numbers, cop drama that doesn’t maintain any palpable sense of peril. You never truly feel that the protagonists, nor anybody else for that matter, is any danger – and their nonchalance seeks only in highlighting that, and it doesn’t seem like the scriptwriters have really tried to craft anything particularly substantial nor significant. Still, it’ll make money, so guess that’s job done in their eyes.

Kevin Hart & Mark Walhberg star in trailer for ‘Me Time’