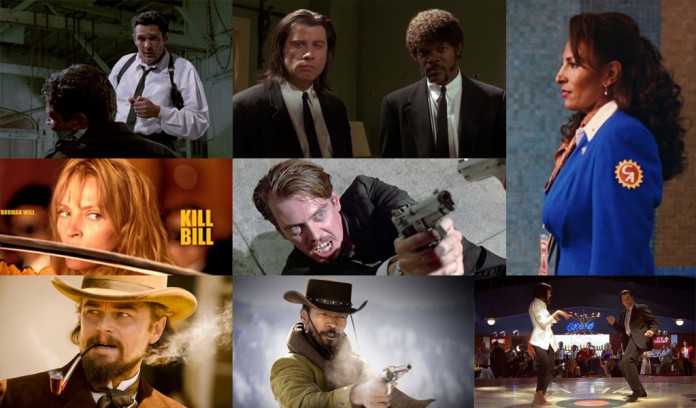 Quentin Tarantino is one of the most celebrated directors working in Hollywood today. He remains one of the few directors who has achieved both mass critical plaudits and box office success- his last film Django raked in a whopping 0 million worldwide and also earned itself several award nominations.

Tarantino will be hoping to be repeat that success with his latest movie, a return to the Western genre, The Hateful Eight. Having already opened in America the film will be hoping to emulate Django’s box office success and hopefully grab the Academy’s attention as well.

So what is it that makes Tarantino such a success? One of the key elements of his movies is his wide array of weird and wonderful characters. Like other great auteurs Tarantino has a set of actors he likes to work with and knows how to get the best out of, and how to build his characters around them.

To celebrate the release of The Hateful Eight in UK cinemas we are going to take a look back at ten of the most memorable Tarantino characters of all time.

Leonardo DiCaprio’s first, and to date only, appearance in a Tarantino movie is one of the most memorable from 2012’s Django Unchained. DiCaprio played against type in the film, taking on the role of a sadistic plantation owner who was holding Django’s wife as a slave.

DiCaprio revelled in playing such a sadistic role and hammed it up to the max. He also made the role famous by legitimately slicing his hand during a scene with Christoph Waltz.

The eponymous Bill from Tarantino’s stylish, violent double feature is one of the most interesting villains in Tarantino’s catalogue. Played to perfection by the late David Carradine Bill remains a mystery for the most part of the first film, only been seen from the shadows or heard over the phone.

It is in Kill Bill Volume 2 when we finally get to meet Bill in person. Far from just a two dimensional villain Carradine’s take on Bill is one of an emotionally complex character with some very interesting motives for his crime. Many have argued that the end of Kill Bill is something of an anti-climax but personally I always found the intimacy of the final showdown to perfectly suit the nature of their relationship.

Steve Buscemi’s Mr Pink is one of the key characters in Tarantino’s first movie Reservoir Dogs and he was a great example of things to come.

Full of memorable quotes and a slimy demeanour Buscemi’s Mr Pink would be the best thing about the movie, save for one character who is going to appear later on this list. The opening scene where he discusses tipping at the table with the other criminals remains one of Tarantino’s finest exchanges to this day.

John Travolta, the man famous for Grease and Saturday Night Fever, was cast against type for Tarantino’s Pulp Fiction, and it turned out to be one of the most inspired pieces of casting of the 1990’s. Travolta’s Vincent Vega, one half of a hit-man duo at the centre of the movie is as cool as a cucumber.

The sequence where Vega and Mia go out for dinner is one of the director’s most iconic scenes and it also give Travolta yet another chance to show off his dancing skills. The character also has the unfortunate habit of needing the toilet whenever a key event in the movie is taking place; during the hold up at the cafe, when Mia overdoses and also when he is shot dead. It’s a strange little quirk and one that could only come from the imagination of Tarantino.

Django embodies cool, quite like Foxx himself, and thanks to the actors soft tone of voice he becomes one of the director’s most emotionally rich characters.

Django’s story is one of good vs evil- a man hellbent on saving his wife from the hands of plantation owners, who will stop at nothing to be reunited with the woman he loves. He is arguably the most morally pure character Tarantino has ever written and the movie relies on his story.

Warning: this scene’s got some very nasty violence in it.

Jackie Brown is Tarantino’s most under rated work. It is a smart tribute to Blaxploitation movies, a thrilling crime drama and also a subtle romance – it remains as Tarantino’s most mature movie to date. The brilliance of the movie is in large due to the performance of Pam Grier as the central character.

The director showed with Jackie Brown that he could write strong female characters with a tangible emotional complexity to them. The performance earned Grier a Golden Globe nomination but was wrongly snubbed by the Academy- something that has happened to Tarantino for the most part of his career.

Michael Madsen’s Mr Blonde is delightfully sadistic – a character who makes you want to look away from the screen the whole time you are watching him whilst equally being one you can’t take your eyes off. Madsen is clearly having the time of his life playing Mr Blonde who is introduced to us half way through the film carrying a beaten up police officer in his boot.

What happens next has become one of Tarantino’s most iconic scenes and also one of the best uses of a song in cinema. Mr Blonde proceeds to torture the cop in the hope of getting information out of him concerning who ratted them out. He ends up chopping his ear off whilst dancing to Stealers Wheel’s Stuck in the Middle of You. Tarantino at his finest .

The second of Tarantino’s movies to have a female lead after Jackie Brown, Kill Bill is an ode to martial arts and revenge movies and is one of Tarantino’s most fun movies to indulge in. Uma Thurman gives us perhaps her best ever performance as The Bride, a woman betrayed and left for dead on her wedding day by Bill and the Deadly Viper assassination squad, of which she used to be a member.

The Bride then proceeds to slice up anybody who gets in her way over the course of the two movies, ultimately leading to aforementioned showdown with Carradine’s Bill. We spend more time with The Bride than any other Tarantino character and because of this we are fully behind her getting revenge at any cost.

Over the course of Inglorious Basterds, Tarantino’s revisionist World War 2 movie, we meet all ranks of the Nazi party, including Adolf Hitler himself, but of all the despicable human beings we meet in the film none are quite as chilling as Christoph Waltz’s Hans Landa.

Landa, nicknamed the Jew Hunter is introduced to us when he and a group of Nazi soldier’s raid a farm house in France. Upon entering Landa sits down and chats to the farm owner, a French family man who is hiding Jews under his floor boards. The scene is perfectly executed and Waltz, who was widely unknown at this point delivers his lines to perfection.

It remains as one of the most chilling and intense scenes in Tarantino’s canon and it really helped put Waltz on the map. The actor would go on to pick up and Academy Award for Best Supporting Actor that year and rightfully so.

Of all of Tarantino’s characters Samuel L Jackson’s Jules Winnfield has embedded himself in the public consciousness more than any other. Every teenager and young adult will have, at some point in their lives quoted him and some may even own a Bad Mother F*****r wallet. The character is easily Tarantino’s most memorable and he is brought to life perfectly by Samuel L. Jackson.

His exchanges with John Travolta showcase Tarantino’s screen writing capabilities and are also the strongest feature of the movie. Intense and humorous in equal measure Jules is Tarantino’s finest creation, one that is often imitated but to quote the man himself from another of Tarantino’s films – ‘accept no substitutes…’