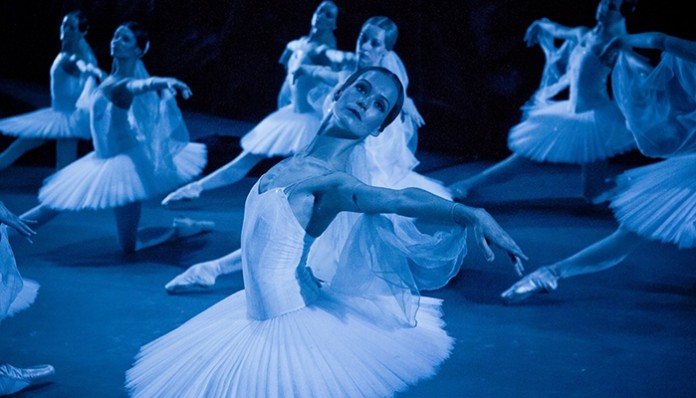 When dealing with a feature film about Bolshoi, expectation can go either way. For some, eyes will roll at the thought of enduring classical Ballet for two hours, but many will leap at the chance to be consumed by the magic of some of the most skilled and talented dancers of this 200 year old company. Like rugby is to New Zealand and cricket to India, ballet falls into the same category when it comes to the vast nation of Russia. A religion that on the surface seems glorious and enjoyable, yet beneath the tutus and tights it’s all regime and gruelling hard work.

Directors Nick Read and Mark Franchetti take on the challenge of presenting this corrupted company two years after creative director Sergei Filin had acid thrown in his face by soloist Pavel Dmitrichenko. A tragic event for anyone to go through, especially if you are the face of Russian theatre. News reports, interview clips and Filin’s recovering face all splice together resulting in one solid conclusion; if the theatre is damaged it’s a clear reflection of the state itself. Ballet has always been the symbol of Soviet and indeed Communist Russia – it brought this nation together. After this scandal, even avid fans who have sat through every single performance of the Bolshoi, now feel it is tarnished and radical change is needed for the company.

Getting stuck straight in, we hear from ballerinas Maria Alexandrova, Anastasiya Meskova and Maria Allash who certainly don’t sugarcoat anything when it comes to their profession. Words like torture, hardship, venom and hate come quickly to these woman. There’s no money in it, so why do they partake in such tough training and outright abuse? There are laughs and there are smiles but it all comes down to wanting to do it for themselves, no one else. Being on that stage means everything, their only fear is not being picked and never appearing on stage again. One weak jump, one imperfect pirouette and you’re out.

To be in Swan Lake is every ballet dancer’s dream, one performer stated, but as hard as Aronofsky tried to make Black Swan look brutal for Portman, this shows just how inhuman it can really get. Many stated there are always fierce arguments; everyone has a dark side, no matter how much of a facade they put on when performing on stage. Much of what we see outlines the company as being ruthless and unforgiving so much so one dancer was happy to say that she was lucky enough to never have her ballet shoes cut, needles in her points or pins in her costumes, but it does happen, all the time.

Members of the public simply couldn’t fathom that this happened in the world of art. Yet when Bolshoi Babylon reveals the company’s hierarchal nature, even with new general director Vladimir Urin running things, there is so much shaming and negativity floating through something that should be full of energy and positivity.

Bolshoi Babylon is a well-balanced and insightful documentary, though without a passion for the art-form, or a deep intrigue into the story surrounding the attack of Filin, there isn’t an awful amount to gain from this production. But this stylish account shows us the short-lived life of a dancer is something worth fighting for, and it doesn’t matter how beautiful it is on the outside, it’s beyond boiling point within.

Edgar Ramírez on the enduring, adventure-filled thrills of Jungle Cruise