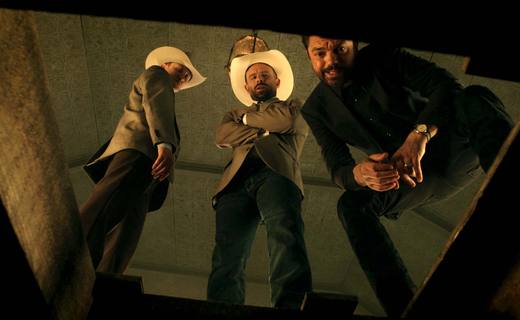 It took an episode or two of filler but finally the chickens are coming home to roost for Dominic Cooper’s Jesse. First in the form of Quincannon (Jackie Earle Haley); who sends in a gang of heavies to swiftly get their asses kicked and their weapons stolen by Jesse.  Improbable? Yes, but pretty funny to watch. Then comes the real kicker, the dirt beneath the church starts to stir and Eugene (Ian Colletti) emerges. At Jesse’s summoning the poor kid dug himself out of Hell (“It’s not that far.” best line of the episode). From the moment he returns though something seems wrong, Eugene is little affected by his time in the underworld and he knows more than he should; about Genesis and the angels.

Jesse figures out fairly quickly that Eugene isn’t really there but whether this is hallucination or vision from Hell the ambiguity is well executed. The scene isn’t really about Eugene, it’s about Jesse’s revelation that’ he’s gone too far. He’s abused the power of Genesis and is now reaping the consequences. Albeit consequences he can repel with a high-powered rifle and a Molotov cocktail. This is the first time we’ve seen Preacher attempt firefights and director Kate Dennis pulls it off with aplomb. Despite almost never hitting a body part Jesse’s shots are visually telegraphed in rapid succession.

Jesse calls in Fiore (Tom Brooke) and DeBlanc (Anatol Yusef) to make a deal. He’ll give them Genesis back if they get Eugene out of Hell for real. As ever they’re cagey about the whole thing, staying vague about if they even can pull out such a thing. This time though they won’t be turned away, even as Jesse panics about losing Genesis they calmly remind him that it has only made his life worse. With Eugene at his side and Quinncannon ready to storm he relents and the Angels tease out Genesis. Then they get up to leave, with no intention of saving Eugene. When Jesse protests Genesis is disturbed and burst from its prison and back into him. Unlike previous episodes though this doesn’t feel like things just being stuck back into place. Fiore and DeBlanc walk away is resignation but it’s clear they’ll be back and they won’t be taking Genesis out the easy way.

With no hope of getting rid of this power Eugene disappears and Quinncannon’s men resume their assault, riddling the church with bullet holes. Jesse fights them as best he can but is corned by Donnie (Derek Wilson) who shot out his own eardrums to avoid Genesis’ power. Yes, it seems all of Jesse’s mistakes over the course of the series are coming back to haunt him. The only other person to be so traumatised by The Word is the one who takes him down.  Quinncannon enters and a defeated Jesse signs over the church.

This is an episode in which we get a peek into everyone’s disturbed minds. From the flashback which sees the origin of Quinncannon’s meat worship (he’s seizing the church for the God of Meat). It’s the kind of insanity that only Preacher can sell through a combination of ostentatious gore and the utter conviction of Jackie Earle Haley. Tulip (Ruth Negga) is sadly side-lined this episode; adopting a bloodhound for a series of scenes which are sweet if not entirely disposable. We are reminded that Tulip is a decent, even warm person but it’s undercut by her subdued rage. Whatever she’s planning for the poor dog we’ll have to find out next time.

Preacher has stumbled the last few weeks but as it approaches the series finale there is a clear dedication to steady the course. ‘El Valero’ is easily the most plot-heavy episode, focused entirely on Jesse and his situation. With supporting players like Eugene, Donny and yes even Emily, organically integrated into the central storyline. It’s really what the show should have been from the start, a narrow focus on Jesse, Tulip and Cassidy (Joseph Gilgun) that wove in characters from outside. If it continues with the strength of drama shown this week then Preacher can happily end its first series on a high note.