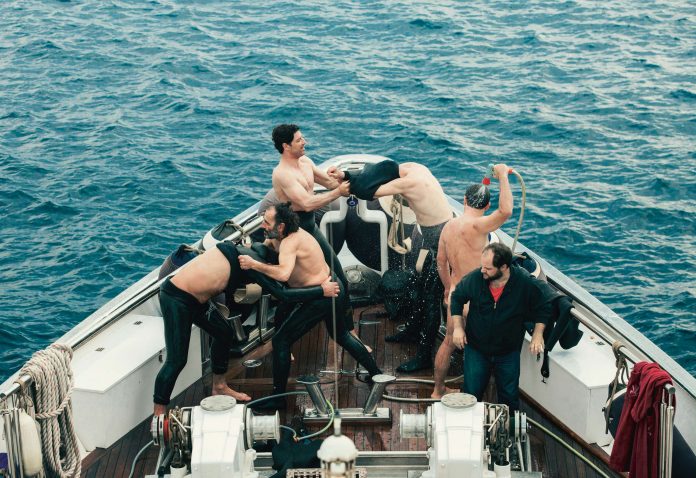 Writer/director Athina Rachel Tsangari follows her 2010 feature Attenberg with this wry yet colourless study of an all male crew on an Aegean boat-ride back to Athens. Having exhausted their board game options, the yacht bound bunch become stricken with boredom so devise a game called “The Best at Everything”. The contest involves the crew assessing each others lives and mannerisms then voting who they think is the best in general, with the victor set to win a Chevalier ring, owned by one of the troop. But, after a civilised start, the competition devolves into an almighty, riotous alpha/ beta battle where immaturity, awkwardness, mortification, glee and gloating ensue before blood is eventually drawn.

Many unique and amusing moments are strewn throughout this testosterone fuelled voyage as the crew become boastful before collapsing into child-like competitiveness but ultimately Chevalier fails to sail or resound as one would have hoped given the intriguing central concept. While there’s scope to craft peculiar scenarios and extrapolate character nuances, Tsangari (as a writer) succeeds to some degree but falls short at exploiting her story’s winning facets for a work that truly whisks or reverberates. Heedlessly entertaining and seemingly improvised sequences surface amongst the scripted but fail to coalesce, heighten drama or expand on the narrative and characters. The story just reiterates their mutual immaturity and overriding urge to triumph without experiencing real epiphanies.

Chevalier swanks cracking performances and sharp direction from Tsangari, but, a lack of a protagonist/arc, drama (other than petty quibbles) and plot drive, makes it echo like a social experiment more than a work of fiction. Maybe it would have worked better as a straight-up documentary or (gulp) reality TV series. The story saunters silkily and Tsangari is great at extracting the acting while defining moods and visual motifs yet the script (by Tsangari and Efthymis Filippou) ambles without care. Spates of dialogue are interrupted by occasional weather updates and a nautical themed score that’s both ambient and experimental, like equipment malfunctioning under water. Tsangari garnishes the backdrop with images of gulls gliding through troubled skies and shots from the boat’s perspective but, as all the characters have the same flimsy ambition, the film’s foundation quivers.

Personalities, appearances, modes of conduct, social status’, intelligence and fashion senses, are scrutinised over and assessed. The crew judge ring-tones, communication/ stone skimming skills, snores (a scene featuring a row of men staring in silence at one of their sleeping colleagues is hilarious) and how quick and efficiently they can assemble a bookcase. Issues of impotency arise then wither while one boner is brandished about the boat like a sports trophy. A great mimed musical sequence and impromptu Euro pop dance are hysterical but the characters’ inability to evolve, combined with a facetious conclusion, ultimately encumbers Chevalier.

Tsangari’s film is a gruff, burly and mirthful alpha/beta boat-ride with a gaggle of geezers that ultimately suffers from a slack narrative and lack of drive but wins with its dazzlingly withered and wired characters, grounded performances and great directing.

Born to Be Blue Review