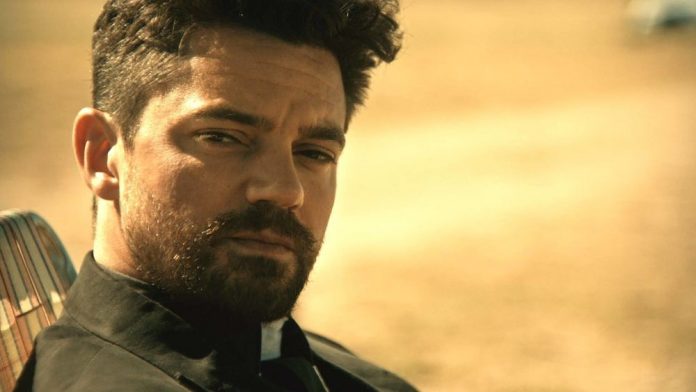 So, at long last Jesse (Dominic Cooper) meets Fiore (Tom Brooke) and DeBlanc (Anatol Yusef) for some much needed exposition into what Genesis (indeed they use the name) is and how it came to be. He presses them for details, trying to size them up but the two are still keeping things vague, until soon the three of them are set upon by another angel, disguised as a middle-aged blonde woman.

Looks like Fiore and DeBlanc are now considered renegades and Heaven is looking to eliminate them along with Jesse. It culminates in a protracted brawl back at their hotel room where the three angels are repeatedly killed and reanimated. The fight is as bloody and funny as anything the series has brought before, especially when they almost have the woman restrained and then Cassidy (Joseph Gilgun) bumbles in, kills her and starts the whole thing over.

From there however things go decidedly downhill. Jesse simply ditches the two in their corpse-filled hotel room with a command to stay away. Once again Fiore and DeBlanc prove themselves completely ineffectual but hopefully bigger guns can be called in soon. While Jesse is clearly curious he wants the power of Genesis, he wants to use it to make the people of Annville better and he’s willing to say hell to the consequences. You can see the doubt in Cooper’s eyes over what he’s about to do but he’s as driven as ever.

‘Sundowner’ though seems to be an episode about characters making stupid decisions in order to generate more character scenes. Last week Tulip (Ruth Negga) was reluctantly leading Cassidy into her back seat, now she’s bargaining into Emily’s (Lucy Griffiths) home and warning her to stay away from Jesse. Here we see the writers grossly overestimate the relationship between Jesse and Emily, with the two having all the chemistry of two chairs stacked awkwardly on top of each other. There’s no reason for Tulip to view as a threat other than to contrive a scene in which the two bond over, what else, Jesse. After all they’re the only real female characters on this show so what are they going to do other than occupy two-thirds of an unnecessary love triangle?

On the subject of unnecessary we get some filler involving Eugene being befriended by some of the kids at school. The appalling graffiti around school is constantly around to remind us how Annville usually treats the kid so the whole thing naturally has a suspicious air to it. However that’s not the case, the kids really do seem to have gotten over the animosity they once held for him. Colletti sells the hell out of Eugene constantly shifting emotions, from trepidation to wide-eyed wonderment to eventually subtle unease. Something feels wrong about the way Jesse has simply forced these people to forgive him, even if Eugene has no idea what it is.

All of this is setting the stage for Eugene of all people to confront Jesse on his change in behaviour. After turning Quinncannon Jesse is now looking to use The Word on the whole town as he installs a Tannoy (PA system to US readers) on the church roof and sets up chairs for the whole town. Just above everyone can sense something wrong about this and Jesse becomes increasingly frustrated as they question his motives. He betrays his lack of conviction in throwing out ‘God’s will’ as his ultimate argument. In order to justify his actions he has to become the kind of pious, inflexible bible beater most people despise.

He doesn’t realise this however until Eugene brings it up. At first he resists, painting Eugene’s doubts as ingratitude given what Jesse has done for him. He balks at the idea that it is unfair to force people into salvation, even if it is what’s right for them. When he’s right at the edge of saving everyone Eugene tries one last time to stop him and, in a rage, Jesse sends him straight to Hell. With that Eugene disappears and Jesse finally stops and looks at himself.

As usual Preacher is held back by trying to manage multiple storylines with limited time. You’d think sending Eugene to Hell would be a dramatic point to end the episode on, but instead we’re left with tying up the loose ends of Quinncannon’s massacre. It’s a bizarre choice of editing and undermines the impact of the previous scene. Other than that ‘Sundown’ feels like yet another episode of build-up, though the show is getting much better, leaving us on powerful, beautifully infuriating cliffhangers.

New trailer arrives for the fourth and final season of ‘Preacher’