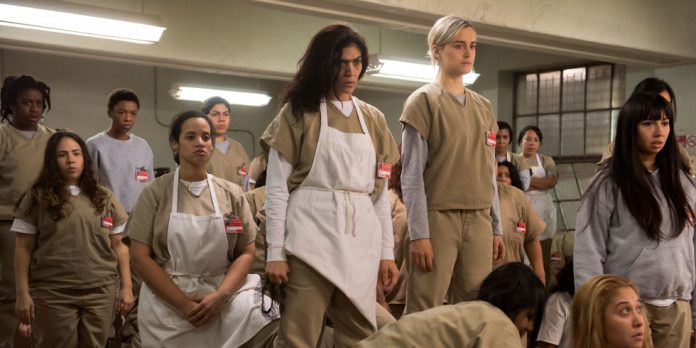 Orange Is the New Black (OITNB) welcomes us back behind the prison walls of Litchfield Penitentiary on Friday 17 June with an all new 13-episode fourth season. Last season concluded with the inmates enjoying a rare moment of freedom, frolicking in a lake just beyond the confines of Litchfield. It was a powerful final note which emphasised the importance of OITNB as a show that explores the ups and downs of female relationships between a diverse group of women.

If one thing is certain from the first six episodes of season four (the basis of this particular review), it’s that this show isn’t letting up any time soon. Things pick up almost immediately after the events of the season three finale as Caputo and co. attempt to get the prison under control after the inmates escaped to the nearby lake. The outcome of Alex’s (Laura Prepon) fate is dealt with pretty swiftly but the implications of what transpire in the greenhouse with Kubra’s henchman will reverberate throughout this season.

Meanwhile, Piper (Taylor Schilling) is trying to maintain her image as ruthless crime boss of a cottage industry selling soiled panties to perverts. However, it’s not long before competition arises in the form of the Latino inmates, lead by Maria (Jessica Pimentel), and things soon begin to get nasty. Elsewhere, a wealth of new inmates are causing overpopulation problems and the effect is exacerbated due to even more cost cutting by the government. Consequently, tensions are rising and racial divisions are becoming more defined than ever. Following her tax evasion, celebrity chef Judy King (Blair Brown) also joins the inmates at Litchfield and strikes up an unlikely friendship with prison handyman Joel Luschek (Matt Peters).

OITNB has always been buoyed by its variety of fully-realised, believable characters and they continue to surprise, delight and evolve in season four. The show’s flashback format is used as entertainingly as ever to shed light on Maria, Maritza (Diane Guerrero), Brook (Kimiko Glenn) and C.O Healy’s (Michael Healy) back stories. This technique, which adds nuance by showing us how each character’s experiences have formed them, is at the the centre of OITNB’s allurement. As a result, even though the first half of this season features some rather inconsequential, low-stakes sub-plots it’s hard not to find something to love about each one thanks to the complexity of every single character.

What OITNB lacks in plot and momentum it makes up for with its array of sweet and thrilling character moments. For instance, Brook and Poussey’s (Samira Wiley) blossoming romance is expertly developed with warmth and tenderness and elsewhere the quick-fire exchanges between the brilliant Crazy Eyes (Uzo Aduba) and Taystee (Danielle Brooks) are effortlessly fresh and hilarious. Piper and Maria’s increasingly fraught relationship also promises an intriguing stand-off later down the line. Newcomer Judy’s sassy yet welcoming persona makes her a worthy addition to the cast and muscular new guard Piscatella (Brad William Henke) is a change from the inept guards that proliferate Litchfield.

And of course plaudits have to go to the amazingly talented cast who continue their top-notch work right from the off. The script also remains razor-sharp and is not afraid to delve into some hefty racial issues, examining the wrongful and unfair judgements we often assign to different races. The only real negative in the opening six episodes is that several of the cliffhangers feel flat and aren’t used as effectively as they were in previous seasons.

Nevertheless, OITNB has a habit of exploding unexpectedly and this sense of volatility remains palpable as certain narrative strands begin to come to the boil at the season’s mid-point. OITNB continues to be one of the most inventive, funny and insightful shows around, producing vital representations of diverse, multi-faceted women.