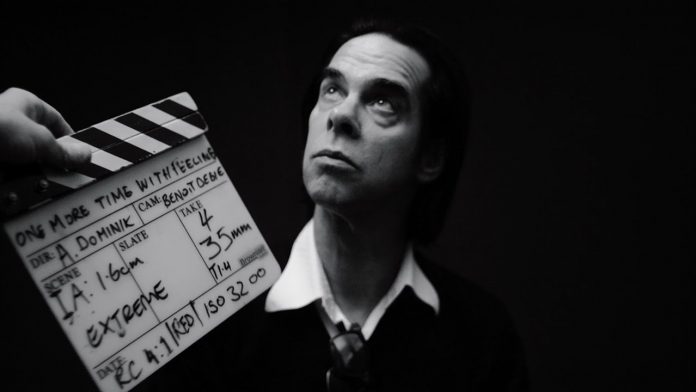 New Zealand director Andrew Dominik was last in Venice in 2007 with The Assassination of Jesse James by the Coward Robert Ford. His other films include Chopper and Killing Them Softly and what they all share, aside from visually stunning cinematography and a deft directorial hand, is the portrayal of killers. In One More Time with Feeling, Dominik’s remarkable documentary about Nick Cave, death rears its ugly head again, only this time we are viewing Cave and his family’s grief after the accidental death of their 15-year-old son Arthur.

The film follows Nick Cave and the Bad Seeds around the studio as they record their latest album and it also follows Nick to his Brighton home, where he and his wife Susie have frank and brave discussions in front of the camera about their son and their grieving process. And this is no ordinary camera: Dominik has chosen to film not just in black and white, but in 3D. The director’s use of the unwieldy, new-fangled camera reflects Cave’s emotional state: it’s new, difficult to understand, everything viewed differently. A 3D camera depicts reality, but it is an off-kilter one bearing only a resemblance to what we actually see. As Cave describes life after Arthur’s death, he talks of his inability to understand what is normal; he goes about his everyday life, but perceives changes in his reactions to people and in their reaction to him. Everything continues, but everything is different. Nick and Susie Cave articulate to devastating and heartbreaking effect exactly what grief is.

However, this is not a miserabilist tear-jerker. For one thing, we have the music and get to see the intense activity of musicians at work. It’s a fascinating microcosm made up of musicians, producers, technicians (and the film troupe). The film opens with Warren Ellis, Cave’s longtime friend and fellow Bad Seed, talking of his discomfort at talking about his friend, and in particular his friend’s grief, on film. With his towering figure and immense beard, Ellis is like Prospero on the island when we see him in the studio. He conjures up incredible music, orchestrating the musicians and running the show with a wave of his arms. And he is quietly protective of his old friend. The camera moves from room to room, circles the performers and often takes off on its own journey around this musical kingdom.

If you are not a Bad Seeds fan, fear not. You probably will be after the film, and even if you’re not converted, any music buff or poetry lover would relish seeing these craftsmen at their work. There is a nice mix of Cave reading his lyrics off-camera and then performing the songs. And he speaks so eloquently, in such a way that it’s occasionally hard to know where a song stops and a conversation begins. The film could have done with being a little shorter and perhaps not all the songs were necessary. For viewers unaware of Cave’s bereavement, it is initially confusing as to what the conversations are about and where the film is going. There is also a moment when Dominik chooses to use colour, which seems unnecessary. Yet these are minor niggles.

Although focusing almost entirely on Nick, it is Susie who is at the heart of this film. First glimpsed visiting the studio with their son Earl, we often see her from behind and when she turns to us, her hair covers much of her face. But when we see her at home and working in her studio, her openness is astonishing, at once brave and beguiling. Cave talks about women being three-dimensional and men being two-dimensional and it is true that Susie brings a different dimension to this film, however briefly she appears in it. We see photos of Nick and Susie before children, and then before death, and they talk of how they have changed. Yet in the end, Cave talks of how together they made a decision to be happy.

The film ends with a recording of their beloved Arthur and Earl singing at the piano. If you can get through this film without shedding some tears then you are made of sterner stuff than this reviewer. It’s a beautiful tribute to a lost child, and to love overriding death.