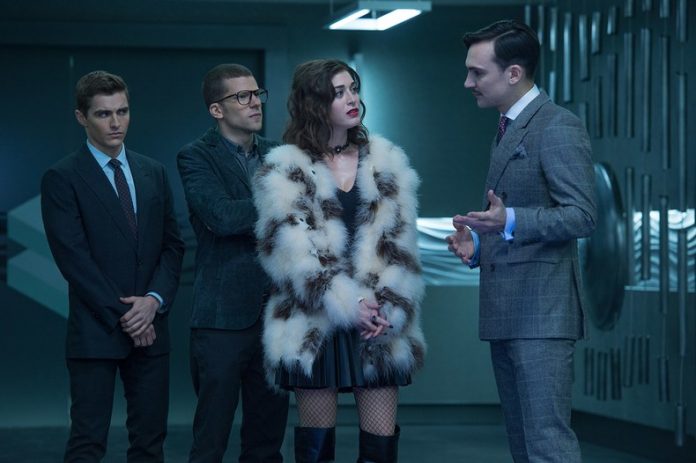 Spurning the opportunity to title this sequel “Now You Don’t” is an early, and indicative disappointment that deems this Jon M. Chu endeavour somewhat superfluous, as, three years after Louis Leterrier’s Now You See Me, we delve back into the lives of The Four Horsemen; a troupe of magicians metaphorically donning Robin Hood’s feathered hat, to commit elaborate crimes with the very best intentions at heart.

Having royally outsmarted the FBI, and garnered the affections and support of the public, The Four Horsemen – made up of J. Daniel Atlas (Jesse Eisenberg), Merritt McKinney (Woody Harrelson) and Jack Wilder (Dave Franco) have since become one short of a full collective, and so bring in the talented, charismatic Lula (Lizzy Caplan) to join forces with, under the supervision of ‘The Eye’ and the diligence of ringleader Dylan Rhodes (Mark Ruffalo).

Having outed the unethical businessman Arthur Tressler (Michael Caine), the gang now set their sets on a tech magnate, though instead find themselves the unwitting participant, and victim, of an overstated trick set up by the nefarious Walter Mabry (Daniel Radcliffe). The Four Horsemen vie tirelessly to clear their name, and ensure that the antagonists in this operation are exposed for exactly who they are – but it’s going to take some stunt to pull it off.

The preceding endeavour came equipped with a compelling detective element that derived from the FBI’s pursuit of the heroes, as we sought in determining who is behind the operation – and while that elusive nature still lingers over proceedings, it doesn’t define it, and proves to be detrimental to this sequel. What does help, is the tumultuous sense of mystery than enriches the protagonists, as they remain heavily flawed, and we’re never quite sure if all is as it seems, and exactly which side they are fighting for.

That being said, there’s a certain smugness about their demeanour which becomes rather unappealing, and while it’s part of who they are, and a crucial element to their performances, it makes it difficult to root for them, as you struggle to want anybody with such unrelenting confidence and self-satisfied grins smacked across their faces to ever succeed, instead wanting them to fail miserably. They do have rather a lot to feel superior about however, as they wrangle themselves out of potentially sticky situations, and pull off elaborate stunts with a seamlessly choreographed simplicity, like a well-rehearsed ballet in how they manoeuvre, which makes for unashamedly entertaining cinema.

That’s where this franchise excels, and why it’s deemed to be so popular, for it offers a relentless form of entertainment, never letting up in its approach. However that’s not to say it’s always easy to comprehend, for the narrative takes a myriad of twists and turns and remains convoluted in its execution. It’s fair to say that if you haven’t seen the last production chances are you’ll find this film rather difficult to follow. Then again, even if you have seen the original you’re likely to find this a challenge to keep on top of, as its distinct sense of complexity remains both its greatest asset, and biggest problem.