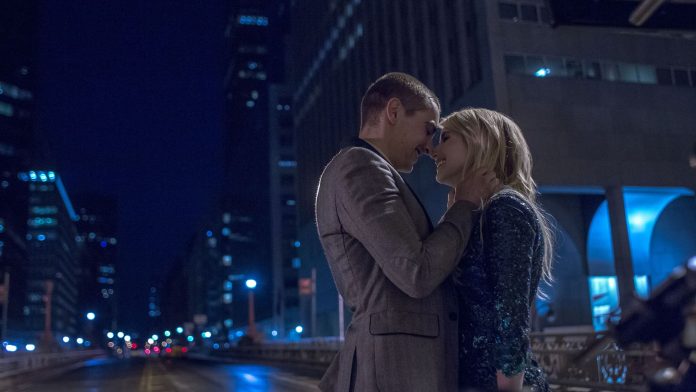 When casting an eye over the impact social media has on contemporary society, utilising real life tools and means of technology to inform the narrative at hand, you’re inadvertently subscribing to the notion of realism, steeping your tale in familiar surroundings. With Nerve, directed by Henry Joost and Ariel Schulman, we struggle to find a compatible balance, as we scrutinise over such pertinent issues in an overtly cinematic way, as a film guilty of using up just a little much artistic licence, just doing enough to push the viewer away.

Vee (Emma Roberts) is often in the shadow of her best friend Sydney (Emily Meade), particularly evident in when the latter generates a rather vast online following, having become a ‘player’ on the new online phenomenon called Nerve. The idea behind the game is simple, you either choose to be a watcher or a player – the latter completing a set of dares in exchange for cash, the former tuning in, dictating the rules. Those with the most amount of watchers make up the top ten, with the final two eventually competing in a final with lots of money at stake.

After Sydney embarrasses Vee by asking out a guy at school on her boyfriend (a proposal rebuffed), Vee decides it’s her time to show there’s more to her than meets the eye, and so signs up to Nerve as a player. Her first dare is to kiss a stranger for five seconds – and this is where Ian (Dave Franco) comes into play. After completing the first mission, Vee discovers Ian is a player himself, and the pair start competing dares together, and in turn, start rising up the ranks, much to Sydney’s displeasure. Though the higher up they get and the more people they have watching their every move, the deeper they become, and the prospect of leaving Nerve behind becomes a rather unlikely one, as the watchers take control.

Modernity is the prevalent theme in this instance, and through that we cover a myriad of aspects that derive from this hypothetical online phenomenon. From the adrenaline junkies, to those thriving from the faux sense of important garnered from online notoriety, to the immediacy of the internet, all the way to how we share content, always filming, capturing every single moment on camera. Then we address online trolls and how every action has a consequence, albeit under this mask of invisibility, yet we’re all culpable. Joost and Schulman – along with writer Jessica Sharzer – address and explore all of these ideas through this one simple premise, casting an eye over the dangers of the world wide web.

However any such simplicity is carelessly deviated away from, as we grew almost too ambitious towards the latter stages. Whereas Unfriended, which studied similar themes, remained within its means, and in turn, believable. With Nerve a huge suspension of disbelief is required, and while analysing very relevant ideas, it’s been do so via an unrealistic game. Of course this is cinema and that’s to be expected, but in this case the distance between the real world and what we’re seeing play out in front of us is so vast it can become a challenge to connect with.

The ending is emblematic of this notion, becoming all too unsubtle in its execution, and so far-fetched. But there remains enough of a comment on society, and an unashamedly engaging narrative, to deem this a worthy slice of contemporary cinema. The game of Nerve may hinge on whether you’re a watcher or a player, while in the case of the movie, it’s actually rather rewarding being comfortably in the former camp.