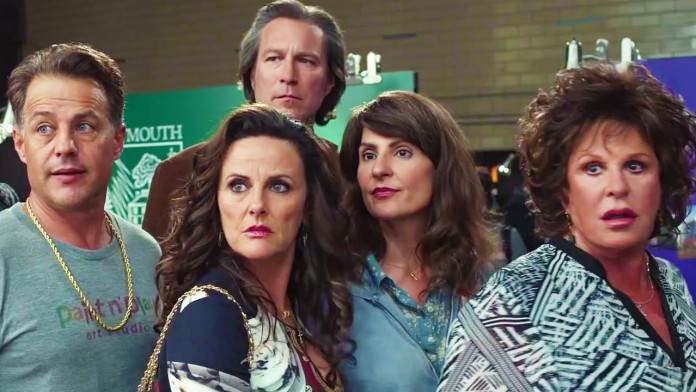 If you’re a fan of 2002’s My Big Fat Greek Wedding, you can easily forgive the 14-year wait to revisit the chaotic Portokalos family. Like any family reunion, you look forward to the event but dread the possible outcomes. The sequel, again written by lead star Nia Vardalos – who plays the long-suffering Greek-American Toula from Chicago, has the same effect; it has its ups and downs, dramas and frustrations, but casts an undeniably fuzzy nostalgic spell over proceedings.

In this sequel Toula is still married to WASP vegetarian Ian (John Corbett) and lives next door to colourful and emotionally-draining parents, proud Greek dad Gus (Michael Constantine) and mum Maria (Lainie Kazan). However, she now has an equally suffering teenage daughter called Paris (Elena Kampouris), who is getting the same comments from her grandfather about her lack of a Greek suitor, just as mother got.

While Toula and Ian’s marriage has become a bit stale in the passion department, another longer-standing marriage is exposed as a sham. The Portokalos clan must rally the troops to set matters straight and throw the best wedding celebration ever (again) – Greek style.

Vardalos begins by doing all the right things to recapture the success of the 2002 Oscar-nominated film, including the familiar locations and bringing back the original cast – like outspoken Aunt Voula, portrayed by the ever brilliant Andrea Martin. She also re-introduces the various catchphrases and idiosyncrasies, which get fan sniggers and some fresh laughs from newbies. That said the latter might be phased by the infamous Windolene gag as it’s not really explained in its own right. Here lies the problem.

Vardalos has so much to reacquaint her audience with, while introducing new elements that it all feels like a scatter-gun comedic approach, with only Voula getting her deserved breathing time. There are numerous sub-plots, as the writer seems to not want to leave anyone out. For example, one key family member turns out to be gay, which is given a fleeting remark to continue on with the merriment. Knowing Greek culture, this would be a far bigger deal – just think about when the family found out that Ian didn’t eat meat.

As cute as the whole coming-of-age Paris tale is – mirroring her mother’s independence issues, it just pales into insignificance to the dominance of the other character’s concerns. It really does feel like a battle of personalities on screen, each vying for your attention. However, it’s the sheer mayhem we first fell in love with in 2002, plus strange habits that may well brazenly bang the ethnic stereotype drum, but are part of this film’s self-mocking charm. Here, Vardalos really does keep things trivial as not to offend.

Vardalos and Corbett as Toula and Ian still hold that endearing appeal, even though they have become far too comfortable with each other to the point of smugness. Throw in another awkward car-parking scene that’s as predictable as it is a welcome little nod to their past dating escapades. Vardalos really has her lead’s best interests at heart, which is reassuring, at least.

Mute granny, Mana-Yiayia (Bess Meisler) has become tad overkill this time. The fact that she doesn’t look old enough to be playing octogenarian actor Constantine’s mother is one thing, but she has been turned into the franchise’s mascot joker. It becomes a little nauseating. When something transpires, cue Mana-Yiayia’s silly reaction, like the laziest sitcom writing. It’s one of the givens, like Voula’s unedited comments, Gus’s faux distress, and Toula and Ian’s dopey grins. As much as there is comfort in the familiar, Vardalos would have been wise to push the boat out with much less happening in the tale.

It’s not that My Big Fat Greek Wedding 2 doesn’t have its entertainment value, it’s just it needed to keep the familiarity while cleverly making things fresh. Stick with tradition and the frustrating foibles – that’s where the comedy lies – but don’t actually stick with similar scenarios as last time, otherwise the jokes grow as old as the characters have.