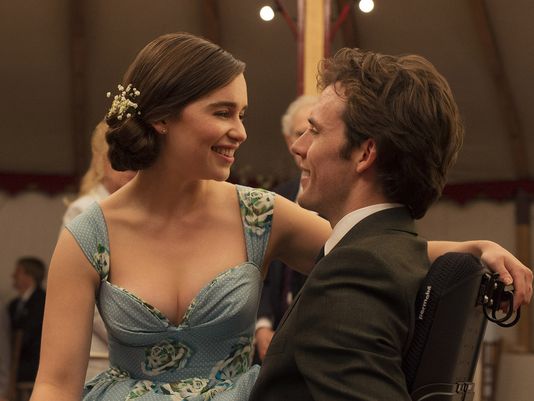 As Sam Claflin’s William Traynor peers at his new care worker, Louisa (Emilia Clarke), through a barbed, apprehensive and mostly cynical perspective, it becomes apparent that his own initial misgivings shadow that of the viewer, in regards to this Thea Sharrock production. Remaining in line with this parallel, as he warms to the well-meaning, harmless individual, we too find ourselves endeared to this film, which becomes increasingly more charming as it progresses.

Louisa Clark has a blissful sense of optimism about life, which she needs to draw upon when fired from her job at a local tea shop in her small town. With a family to support for, she is willing to take anything she can, and finds herself applying to be the care worker for the paralysed, affluent William Traynor, who was hit by a motorcycle. In spite of the patient’s wishes to be left alone, Louisa has the support of his parents Steven (Charles Dance) and Camilla (Janet McTeer) and begins working, though his distinct lack of communication and affability makes for a much harder vocation than she had initially envisaged. That is until the pair start to hit it off – much to the displeasure of Lou’s long-term boyfriend, and fitness freak Patrick (Matthew Lewis).

Clarke displays an infectious enthusiasm and energy that illuminates Jojo Moyes screenplay, and brings life to the character the writer created in the bestselling novel this film is based upon. It’s her endearing sense of naivety that does it, managing to be quirky without feeling contrived in her whimsicality. Quite the contrast from the cold mother of dragons we’ve come to associate the actress with. The balance is key too, as William is somewhat less likeable, and despite his condition he doesn’t evoke empathy and pity, simply as he doesn’t crave it. He’s irritating, which is refreshing, particularly when calling Lou solely by her surname, pointing towards his superiority complex. At one point he laughs about a date who ended up leaving the wealthy bachelor for someone who only ‘worked in the local shop’. Wanker.

But whether romantic comedies live or die is wholly dependant on the chemistry between the protagonists, and in Me Before You that’s not an issue. The entire film is based around their potential coming together and we simply have to believe in it and invest in their romance, otherwise the title has no hope – but thankfully you do, and it helps to paper over the cracks – of which there are many.

Me Before You is, however, let down by its mawkish means of storytelling, presented in such a generic, cliched way – particularly evident during the montage sequence when Lou is researching fun trips to take William on. It’s laughably cheap in its depiction, and is like a parody of a Nicholas Sparks movie. Don’t even get me started on the soundtrack.

Win The Last Letter From Your Lover on Blu-ray