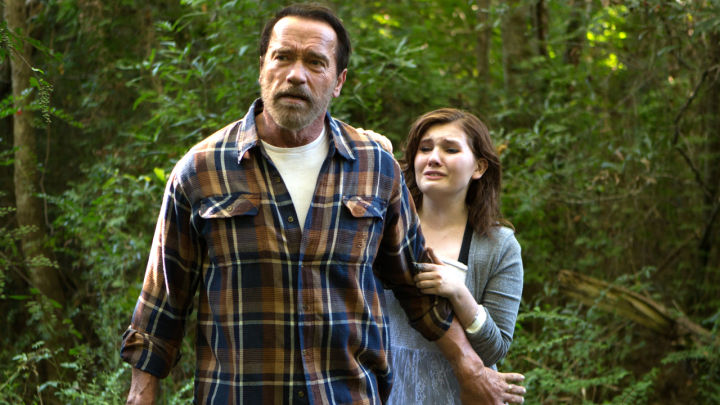 Having contracted the incurable Necroambulist virus while away from home, Maggie Vogel (Abigail Breslin) is quickly quarantined as the infection begins to spread from a bite mark on her arm. With symptoms yet to present, she is temporarily released into the care of her father, Wade (Arnold Schwarzenegger), and allowed to return to the home that he shares with Maggie’s step-mother (Joely Richardson) and half-siblings (Aiden and Carsen Flowers).

As the Sheriff (Douglas M. Griffin) and his partner (J.D. Evermore) monitor the situation, and Dr. Vern Kaplan (Jodie Moore) does his best to advise, Wade struggles to come to terms with his daughter’s condition and the difficult decisions he is going to have to make when it finally consumes her.

So, is Henry Hobson’s debut feature an Arnold Schwarzenegger film, or a zombie movie? Each subgenre comes with its own unique connotations and perceived obligations, and the idea of a film fulfilling both is undoubtedly an exciting one. Having battled Batman, Satan and the Predator over the course of his career, it was surely only a matter of time before the four- (soon to be five-) time Terminator found himself facing off against a zombie horde.

Chances are you can already picture it: the carnage, the puns, the cheese. It immediately becomes apparent, however, that Maggie is not that movie, and neither does it wish to be. To both the film’s eternal credit and detriment, it wants to be its own thing.

Part body horror, part family drama, Maggie essentially treats the Necroambulist virus like any other terminal illness. It’s still science-fiction, obviously — surely no cancer sufferer has had to amputate their own finger after falling off a swing, or check for maggots in the shower every morning — but in essence it’s the same idea: a young girl is forced to watch her health wane, her body deteriorate, and her friends and family slowly resign themselves to her fate.

Breslin is no stranger to melodrama, having played havoc with audiences’ emotions in both My Sister’s Keeper and August: Osage County, but her Maggie is too distant and understated to have quite the same impact. That said, her symptoms are so disturbing that it would be impossible not to sympathise with her struggle. As for Schwarzenegger, the aptly titled Austrian Oak does his best, but there’s no disguising the fact that he doesn’t look or sound anything like his onscreen daughter, and ultimately their relationship is about as compelling as it is convincing.

Sadly, as admirable and visually arresting as Maggie undoubtedly is, cinematographer Lukas Ettlin maintaining a level of lyricism and intimacy throughout, it isn’t particularly vivid or engaging. There’s no reason why Maggie couldn’t have been both illuminating and entertaining, and given how interminable certain sections of the narrative can be — Sheriff Ray essentially has one scene, on repeat — a few judicial one-liners or jump scares would have done wonders for its soporific tonal and pacing issues.

Admittedly, the film isn’t without its distractions — there are two uneventful zombie encounters, neither of which really qualifies as an attack — but it lacks anything that might reasonably be considered a set-piece: not necessarily a money-shot, but rather a scene or sequence that stands apart from those around it.

The aforementioned amputation is suitably squeamish, and a fateful encounter with a fox is nicely played, but there’s nothing harrowing or inventive enough to leave a lasting impression. Like the name of the virus that infects her, Maggie just isn’t particularly memorable. It’s a zombie movie without any bite at all.

It’s a shame, not just because of what it could have been but because everyone involved is clearly trying so hard to do something different. Figuratively, the film’s treatment of zombification is intelligent and insightful, but in practice it just doesn’t hold the same interest. Unfortunately, Maggie’s aren’t the only eyes at risk of glazing over.