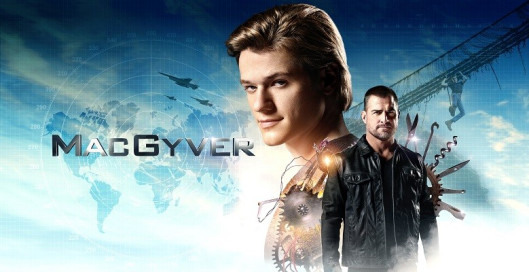 With Season 3 of MacGyver currently airing in the UK on Sky One, James Kleinmann caught up with its star Lucas Till for HeyUGuys in New York to talk about the inevitable comparisons with the original show, getting comfortable with the iconic role and Mac’s limitless inventiveness.

Do you get a lot of older people telling you that they used to watch the original MacGyver?

Lucas Till: “You know it’s funny you say that. I’m not good at checking social media and seeing negative comments. There’ll be a hundred great ones and one negative one and I’ll be like [mimes angrily typing] ‘no, not really dude, that’s no how it works!’ There was some guy who said, ‘I always compare it to the old show,’ it was actually mostly complimentary, but he said ‘I don’t remember the old MacGyver ever killing people’. I was like ‘first of all, you don’t know that those people got killed in that shot, they were next to the explosion and second of all, the original MacGyver did kill.’ I remember there was one episode where he had to kill somebody and he didn’t necessarily want to do it, but he did.”

It’s so creative, with all these incredible ways MacGyver avoids using guns. Do you think there’s a serious point underneath it all?

“On the original show I think there is a reason why he doesn’t use guns, I’m not going to say it because I’m going to get it wrong. We’ve never really got to the bottom of it on our show and I can’t say why that is because it’s really up to creator Peter Lenkov.”

“I grew up in Middle America, Georgia, with a military father, my grandfather was a pastor, real Christian, but also I’m a freethinker, I live in LA and I don’t like to talk about politics. People can watch the show and no matter what your political views are come and talk about something at the end of the day, because I don’t like the divisiveness that the country’s in the middle of right now. At the same time you can’t save the world with people shooting guns at you all the time and not have someone there to protect you. But it is a good conversation to have, to see this guy who doesn’t use guns and he tries not to kill as much as he can and still manages to stop terrorism at the same time.”

Have you got to know MacGyver better over the past couple of seasons leading up to this new one?

“Yes I have. To begin with I was trying to block out everyone talking about the original MacGyver. It’s not that I don’t care, I just can’t focus on that, I’ve got to do my job and then you’ll decide and that’s not up to me. Everyone kept asking ‘is it going to be better?’ or ‘is it going to be as good?’ And I was like ‘I don’t know.’ There was that pressure and also the pressure of me having only done movies up to that point. I used to say that this is like my first real job! It was just overwhelming, I had do like ten pages of script a day. I just did 22 pages in two days. I was used to doing three pages or just one page a day on movies. So it took a while to hit the groove and now I finally feel like I have. I used to spend so much time memorising lines, just freaking out about it, and it was the anxiety that was making it hard for me to remember them. Now that I feel like I have it and we know the boundaries of our characters, sometimes we like to improvise dialogue on our show. Justin Hires is a standup comedian and George Eads is one of the funniest people I know.”

Have you ever spoken to the original MacGyver actor Richard Dean Anderson about the character?

“I haven’t, no. Did you see the picture of him on the side of the road though? No, I haven’t had a chance to speak to him about the show, I don’t know that he’s happy about it!”

What do you enjoy about the physical aspect of the role? How much of the stunt work do you get to do yourself and is there anything particularly exciting that you’ve done recently that we’re going to see during Season 3?

“This last episode that we just did, we’re stuck in a fallout shelter, Mac and Jack, and we have to get out but we have nothing. There’s a bed frame and an oxygen tank and we make like a battering ram crossbow out of this stuff, which is really cool. Stunt wise, we just do crazy fight scenes every episode. The reason they’re crazy is because on a movie you’ll get a week at least of rehearsal time to do this stuff and you get like five minutes on our show. We’ll split it up into three sections and it’s like dancing, fight choreography, it’s not really like fighting at all. So you’ll get ten steps to learn and then you’ll do the ten steps and then you’ll move on, but you rehearse it about three times a minute before you go and then you do it. And it’s amazing that anything comes out that’s good! We just did this amazing stunt, really fun, where I get on a drone and fly into the place we’re trying to sneak into and I hang on to a drone that Bozer’s flying and I go up in the air. Mac is afraid of heights so he doesn’t like that. They actually strung me up so basically I’m on a crane and I swing up above the camera and when they let me go I’m still swinging, so it was like being at Six Flags theme park.”

We see a lot of creativity in the show, would you say that’s one of the most important traits of your character, his ability to improvise with whatever he’s got around him?

“Yes, improvise or die, that’s his mantra! I think there are a lot of things which you could say that’s definitely what the show’s about, but that’s more of an accident. Matty, Meredith Eaton’s character, says at the beginning of the season ‘I can train people to do what everyone else does here, but I can’t train another MacGyver because he uses what’s around him to solve the problem and you can’t really train that.’ I’ve had so many people come up to me and say ‘I tried to make that thing on the show’ or ‘I did make that thing on show’, which is cool and encourages people to be creative.”

How handy are you yourself, are you good at fixing things or making things?

“I am a little bit, but my dad is eerily impressive. It’s crazy. He fixed a coffee machine the other day. I was like ‘I’ll just buy you a new one’.”

What’s your favourite creative solution or the most outlandish that we’ve seen on the show?

“Everything is at least somewhat based in reality. There was this one time though where we had wine bottle rockets and to this day one of my prop guys has PTSD about it. We’d open up the bottles and empty them, put the cork back in to get enough space, then we used a basketball pump to put air into them and then I taped it around a toilet paper roll and then we put those things on a broomstick. Then we hit the cork and that made it go, the pressure went ‘pshhhhhhht!’ I don’t really think that would work and that was maybe the most outlandish! I was actually kind of upset about it at the time and this was year one and I was upset about a lot, but George was like ‘hey man, Iron Man was fake and look how good that movie turned out!’

Millennials will look everything up online, but MacGyver doesn’t do that, it’s something very refreshing about the character.

“I don’t really think that I identify with Millennials too much, so I like playing a character who rarely uses technology. Tristin Mays’ character Riley uses all the technology, so I just love that Mac doesn’t, because the show would get boring otherwise. As a species we went thousands of years without it and people don’t know what the world was like without technology now it’s crazy!”

MacGyver Season 3 starring Lucas Till is currently airing on Sky One. Catch up on NOW TV.

Official Synopsis: MacGyver, a reimagining of the classic series, is an action-adventure drama about 20-something Angus “Mac” MacGyver, who creates a clandestine organisation within the U.S. government where he uses his extraordinary talent for unconventional problem solving and vast scientific knowledge to save lives. Joining his team on high-risk missions around the globe is maverick former CIA agent Jack Dalton; Riley Davis, an unpredictable computer hacker with a chip on her shoulder; Wilt Bozer, Mac’s roommate and the newest agent on the team; and Matty Weber, a legend in Covert Ops, and the new Director of Operations at the Phoenix Foundation. Under the aegis of the Department of External Services, MacGyver takes on the responsibility of saving the world, armed to the teeth with resourcefulness and little more than bubble gum and a paper clip.