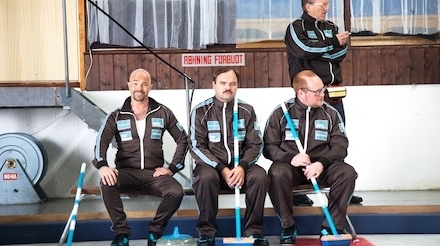 It’s a widely held belief by many that comedy doesn’t travel well. Comedies from Hollywood often face more uncertain futures when it comes to international takings than other genres, particularly action films, and non-English speaking comedies seem to struggle to find an audience outside of their native countries. There are of course exceptions and I for one frequently enjoy comedies that just happen to have a line of subtitles running along the bottom of the screen, but it does seem like a rarity for comedies not made in English to achieve success in the UK or America.

Norway appears to have bucked this trend somewhat in the past year, with Troll Hunter and, to a lesser degree, Norwegian Ninja getting favourable reviews outside of their country of origin, but this could well have more to do with aspects aside from the films’ comedic merits. Clearly looking for crossover potential and to appeal to a broad market comes King Curling, a new Norwegian comedy that focuses on the sport of curling. Speaking in terms of ‘potential’ and ‘markets’ seems entirely appropriate for a film that appears so consciously targeted at a broad audience, with all the lowest common dominator dumbing down that this could possibly entail.

King Curling also lacks much cultural specificity and it is very easy to imagine the film being almost unchanged if it were to be remade in Hollywood, if the film is even marginally successful a remake seems almost inevitable. The recasting of the leads would also be effortless, simply using the cast of Grown Ups would be an obvious fit, and the only sticking point would be that King Curling is so painfully indebted to a variety of Hollywood films that cries of plagiarism would perhaps be too likely.

Drawing on the dumbest that Hollywood comedies have to offer King Curling also adds a thick layer of ‘quirk’ that is clearly also derived from a number of American films. Whilst the premise, a niche sport with a group of misfits attempting to win a big prize to save their mentor, and a lot of the comedic execution is entirely derivative of Adam Sandler, Ben Stiller, Kevin James and so on, there is a concerted effort to draw on the likes of The Coen Brothers (The Big Lebowski) and Wes Anderson (notably The Life Aquatic, but King Curling is dripping in attempts at Anderson’s style). The influence of the latter is so extreme that the filmmakers even thought it wise to lift part of The Life Aquatic soundtrack, seemingly without irony, for use here. Despite some costume similarities they clearly decided that wearing blue Adidas tracksuits as well was just going too far.

King Curling is rarely funny, occasionally offensive through simple-mindedness (see the film’s approach to the central character’s obsessive compulsiveness), and wholly derivative and even at a brief 75 minutes still a very disappointing waste of time.

King Curling is playing as part of the London Film Festival on the 22nd and 23rd of October.