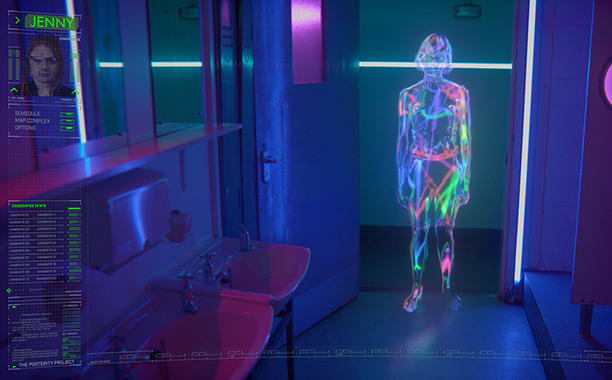 The premise to Martin Owen’s Let’s Be Evil feels akin to that of which lay the foundations for TV series Black Mirror, as though an idea that slipped through the net. Naturally, any such comparisons represent high-praise for this resourceful endeavour, and conceptually that’s the case – but its within the hackneyed execution that lets this feature down, not delivered with quite the same, indelible edge that enriches the Charlie Brooker series.

Elizabeth Morris plays Jenny, in need of cash and so signs up to take part in a chaperone programme, supervising gifted young children at an elusive, underground facility where the students are taught about augmented reality. Jenny is joined by new colleagues Tiggs (Kara Tointon) and Darby (Elliot James Langridge), and while the guardians believe they’re on hand to assist the next generation on how to utilise AR glasses, they too are under instruction by an AI named Arial (Jamie Bernadette) to wear a pair themselves, at all times – with their warped perception of reality distracting them from what is truly going on around them.

When building a world and requiring it’s one that audiences can adjust to, and eventually invest in, it naturally requires a subtle sense of explanation, so we understand the rules of the landscape we are inhabiting – and Owen’s feature is somewhat contrived in that respect, spoon-feeding the viewer, in a film that takes a long time to get going. It’s a shame as when we reach the pay-off everything seamlessly comes together, it just takes a little while to get there. The film’s primary selling point is to adopt the perspective of the protagonists and use a POV camera – and while this enhances the immersive nature of the experience, it also feels like too much of a gimmick, implemented at times when a more traditionalist approach would be beneficial to the narrative, particularly when it comes to forming a bond with Jenny, who can be harder to invest in when seeing through her eyes rather than looking into them.

The visual experience is striking, however, again placing the viewer in the heart of the action, with a vibrant aesthetic, with red a dominant colour. It’s one of many creative elements that Owen expresses, certainly showing off his ingenuity as a filmmaker. Similarly to recent low-budget sci-fi The Call Up, we have a film satirising our relationship with technology, and blurring the line between reality and fiction – and showing, sometimes, how little there is in between. And also similarly to The Call Up – here is a film that is deserving of praise for its ambition, particularly on its modest resources – and yet too flawed a piece of cinema to earnestly recommend.

Exclusive: Drew and Brett Pierce talk about their film The Wretched, cinema’s unlikely saviour during US lockdown