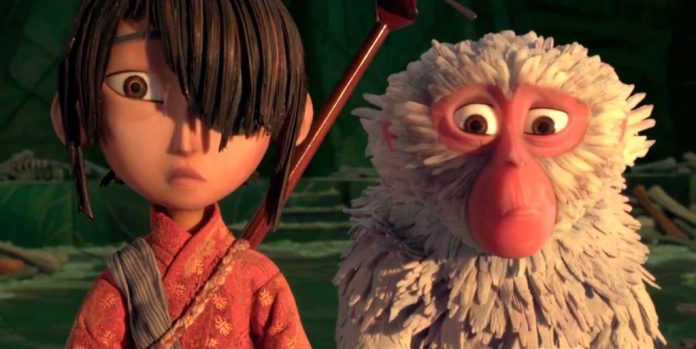 As a continent, Asia has traditions richly steeped in folklore, with Oriental tales of mythology so often illuminating the big screen, most commonly in martial arts endeavours. This enchanting means of storytelling, which promotes spirituality and surrealism lends itself in remarkable fashion to Travis Knight’s directorial debut, Kubo and the Two Strings; a truly magical offering that is spellbinding in its approach.

Kubo, voiced by Game of Thrones’ Art Parkinson, is a young boy enamoured by the world he inhabits, though is reigned in by his protective mother who claims that be must be home before nightfall otherwise he will be captured by her nefarious twin sisters (Rooney Mara) and her father, the Moon King (Ralph Fiennes) who want to take away his one (and only) eye. Curious about his father, who died in battle against the aforementioned antagonists, the brave Kubo disobeys his mother’s strict commands, as while the sun sets he finds himself on the run from a collective of evil-spirited gods and monster, with only a monkey (Charlize Theron) and a human-sized beetle (Matthew McConaughey) to depend upon.

Coming from the same studio (Laika Entertainment) that brought us ParaNorman and The Boxtrolls, needless to say this title has a truly indelible aesthetic, providing a striking visual experience for the viewer, managing to be so unique and absorbing. The sheer supernaturalism and distinctive spirituality of the narrative allows the animators much freedom to do whatever they like, and they certainly use that licence, especially in the way they use the setting around them to craft this tale, in the beautiful way the story literally unfolds around the protagonist, with Kubo’s love for origami not only a gratifying addition visually, but it helps to drive this narrative forward.

The sheer talent assembled within this film is a clear indication of what’s in store, for you know that actors of the calibre of Theron, Fiennes and McConaughey simply wouldn’t have signed up without ambition for the project. What you get with talent of this nature also is a certain quality and nuance to the vocal performers, with McConaughey in particular standing out, providing the film with its comic edge. It’s refreshing also to simply have a lone character in an animation that injects the humour into proceedings through dialogue, without relying on a gimmick, as so often now we see cutesy collective of supporting roles, such as the minions, to provoke laughter.

Kubo and the Two Strings thrives predominantly, however, in its emotional core, with an intelligent take on the notion of legacy that doesn’t patronise the younger crowd. We studiously explore what we leave behind within our children, what we can teach them and what they can take into the world after we’ve gone. But we see this from both sides too, as Kubo struggles to come to terms with his father’s untimely death, and we capture his awakening as he finds a spiritual means of closure.