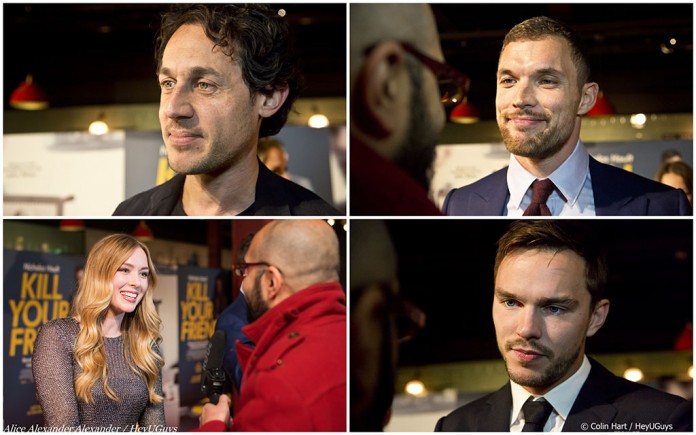 Kill Your Friends launched itself face-first into Leicester Square this evening for the film’s Premiere. Nicholas Hoult leads the cast of Owen Harris’ film which adapts John Niven’s novel of furious backstabbing and bad behaviour in the 90s UK music industry.

James Corden, Craig Roberts and Georgia King complete the cast of Harris’ film which is out in UK cinemas on the 6th of November.

Our red carpeteers Cassam Looch and Colin Hart were there to pin the talent to the wall with their civility and incisive probing. Here’s how they got on…

Give this synopsis a spin,

London, 1997; the British music industry is on a winning streak. Britpop bands Blur, Oasis, Radiohead rule the airwaves and Cool Britannia is in full swing. 27-year-old hit chasing A&R man Steven Stelfox (Nicholas Hoult) is slashing and burning his way through the music business, a world where ‘no one knows anything’ and where careers are made and broken by chance and the fickle tastes of the general public – “Yeah, those animals”.