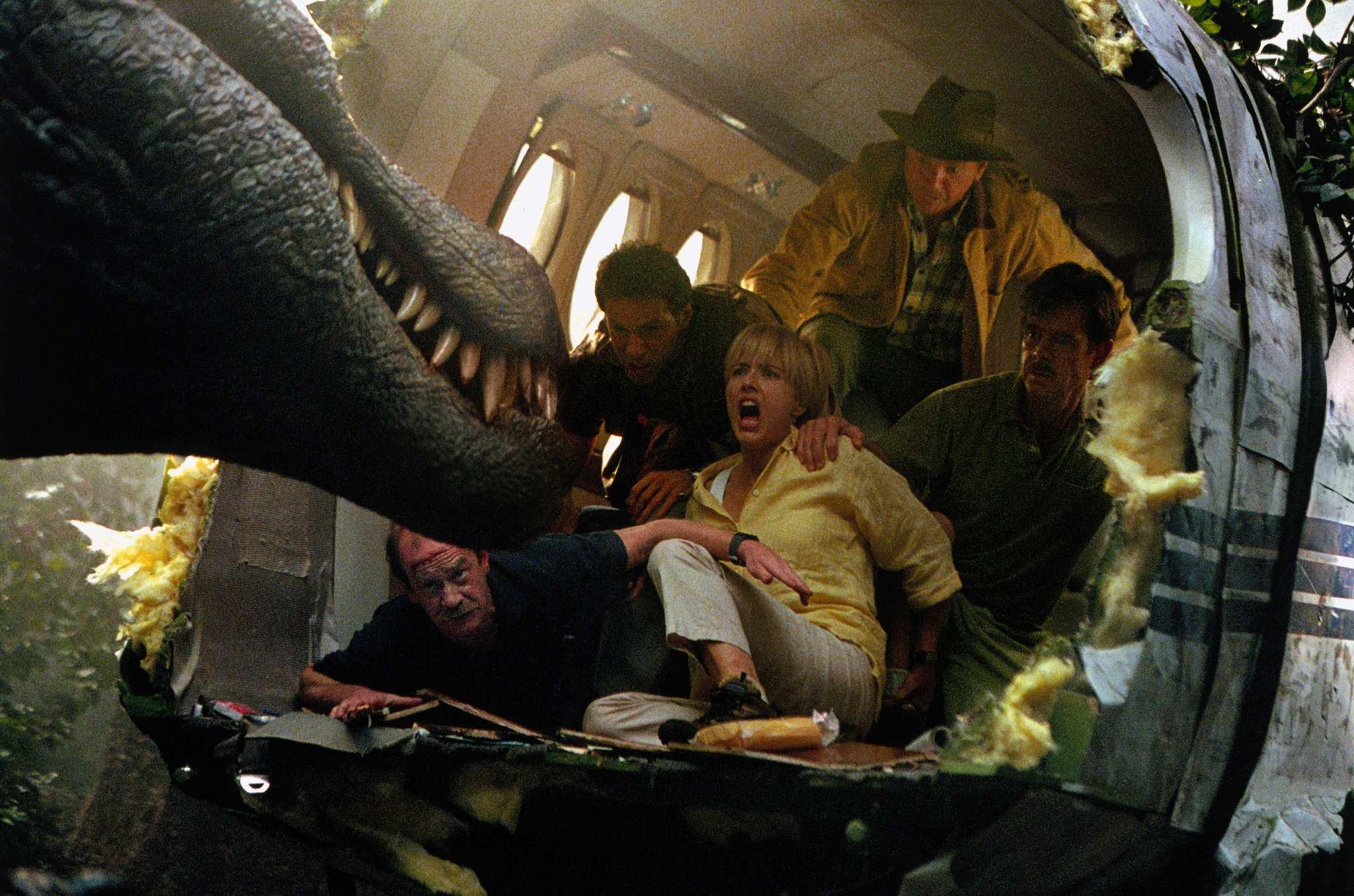 Much like our re-introduction to Sam Neill’s beautifully cynical Alan Grant, I’ll start this defense of Joe Johnston’s Jurassic Park III as if addressing a lecture hall full of naysayers.

So, before we begin, I’d like to take this opportunity to raise the following issues that can be spat back at me like a gob full of Dilophosaurus tar-black phlegm; Grant’s talking Velociraptor dream, the fact after all his moral protestation he was persuaded back to the island by money [again], lazy plot devices such as “you don’t wanna know” in answer to how the kid got the Tyrannosaur’s urine, the kid, how you can hear a mobile phone ringing from inside the Spinosaurus when you can barely hear yours if it has fallen down the side of the sofa, Alessandro Nivola’s decision to take the eggs, and that “did we just run outta money?” ending.

They’re yours, you can have them. I cannot defend the indefensible.

You must remember that the barometer against which you judge these films is imbalanced due to the superiority of a single installment. Temple of Doom isn’t a bad film, but because it exists in the same series as Raiders of the Lost Ark, it inevitably suffers in comparison to that movie.

The Jurassic Park franchise is the perfect case study when it comes to the law of diminishing returns; the first is as perfect a piece of classic family entertainment as you’re likely to see, The Lost World a patchwork greatest hits effort with moments of genius scattered throughout, and Jurassic Park III simply has its moments. But there are enough of these to warrant a re-evaluation, and heck, it’s only ninety minutes long, and when was the last time a summer blockbuster wasn’t bloated beyond two hours?

The first thing the threequel gets right is securing the services of Sam Neill, an actor who automatically improves a film by at least 50%, adorning him with Alan Grant’s fedora only caps it off. Neill’s brand of world-weary sarcasm is a delight, and although without the likes of Goldblum or Attenborough to bounce off of, his presence is enough of an echo from the first film that it helps to smother the inanity of the rest of JPIII’s cast.

Another casting masterstroke is the Laura Dern cameo, not only is it a chance to see the wonderful Ellie Sattler back in this world, but the underlying sadness that comes from knowing they never stayed together after the banner fell in Jurassic Park, adds a real pathos to Grant’s character. The chemistry between the two is still evident, her parting line of “you’re still the best, I mean that” is a real eye mister, and the reveal that the kid with whom Grant shares a sandpit chat isn’t actually his, is nicely played out.

It paints the picture of a rather lonely man, one who hasn’t moved on from the events of the first film, and although the rest of the script seems to abandon this melancholy thread, it remains a stand-out piece of character building in the franchise.

As with the first sequel, Jurassic Park III gave the writers the chance to incorporate aspects from Michael Crichton’s extremely different source novels. Most notably, and for fans who had been looking to the sky since 1993, the Pterodactyl was added to the dino-roster. Hinted at in park murals seen in the previous films, the aviary chapters of the book are a standout combination of Indiana Jones river rafting and classic Jurassic action.

Also taking its beats from that Spielberg franchise, JPIII delivers said wish fulfillment when it sends our party across a treacherously unstable bridge. Up to this point it has just been a lot of running from set-piece to set-piece, usually whilst pursued by familiar dinos, but during this mist-drenched stalking, director Johnston, possibly motivated by the challenge of a creatively original scene, manages to instill some genuine terror into proceedings, introducing the winged serpents like something from a Ray Harryhausen sequence; the silence, the vibrations, the ghostly whooshes as they skirt their prey.

It’s the first time since the original that horror has been invoked to provide the scares, and if this had been the tone throughout then maybe I wouldn’t need to be writing an “In Defence of” piece.

For all of the childhood imagination manifestation of seeing these prehistoric birds swooping upon visitors in Jurassic World, matching their introduction here will be a challenge. Come to think of it, the excitement over the potential of seeing Star-Lord tame a group of Velociraptors can be tempered by the fact that’s only an evolution of what Sam Neill achieves here by blowing into that skull fragment we’ve heard a ton of exposition about.

The narrative propulsion of JPIII is dramatic structure 101; it plays out like a computer game, with the bigger isn’t necessarily better end-game boss, the Spinosaurus, making fleeting appearances until a what could have been the finale, a river based showdown. Jurassic Park and The Lost World both had issues wrapping up their stories, and III is no different. So ignoring the nonsensical beach rescue that inexplicably brings Nivola back from the dead, and an abrupt end to the film, our characters press X to jump, B to parachute, and Y to swim towards a rather fantastic aqua-pyrotechnic set-piece.

It’s a ten minute sequence crammed with call-backs to earlier films – fishing through dino droppings, Ellie shouting down a phone – further franchise nods to Jaws, as the dino Spines emerge from the river, and William H. Macy gets his family saving Chief Brody moment. Plus there are some huge practical Stan Winston effects to rival the original’s T-Rex attack.

Even if it does go a little Looney Toons, with the phone farcically slipping around the boat, the scale and mechanics of the action are impressive, and by today’s standards, extremely rare in their weighty execution.

Joe Johnston has a somewhat unfair reputation for being a director-for-hire, making solid if unspectacular movies (Captain America: The First Avenger, The Wolfman, Jumanji), but what you always get from him is a sense of adventure, with an overriding desire to entertain, and Jurassic Park III, for all it’s obvious faults, and quality depreciation from the original, leaves a big enough footprint in both departments.

Jumanji: 25 Years Later – A Film for Those Who Seek to Find, a Way to Leave Their World Behind