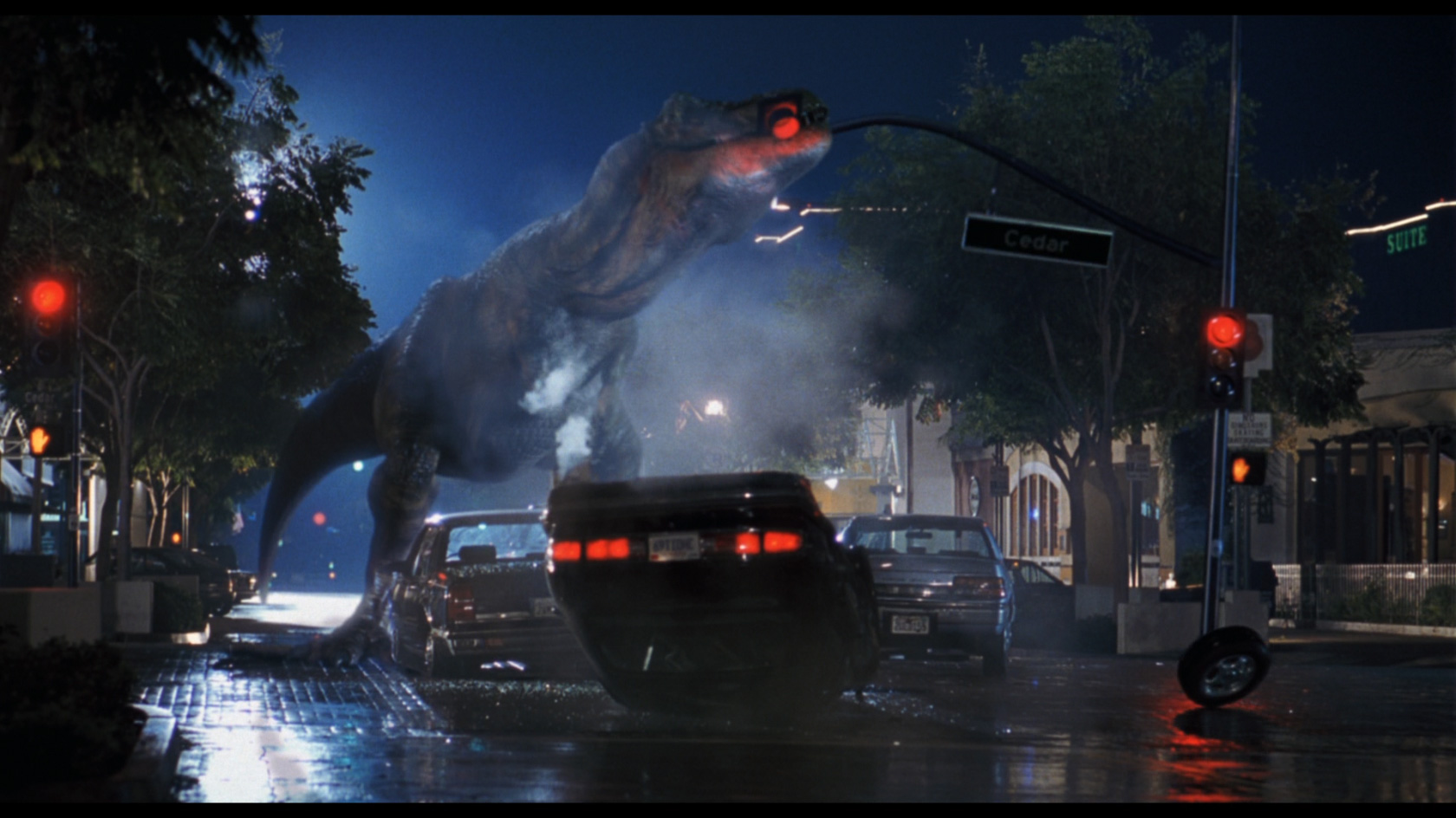 As a young boy growing up in the English countryside, a landscape not dissimilar to that of Isla Sorna, the release of Steven Spielberg’s sequel to a film that acted as a Dennis Nedry style fork in the road of my life, one signposted “cinephile”, 1997’s The Lost World was everything an event movie isn’t today.

A teaser trailer before Space Jam at the local (45min drive) single screen cinema, one that offered up little more than three words, each punctuated with a Dolby infused clap of thunder. SOMETHING. [BOOM]. HAS. [BOOM]. SURVIVED. [BOOM]. A brief appearance by our small armed, goat munching creation from the late, great, Stan Winston, and all of those emotions from the nine-and-a-half 1993 screenings of Jurassic Park danced up my spine.

That’s all that was needed. Not ten more teaser trailers and then trailers for those trailers, not more set-leaks than Suicide Squad, just the intrigue of knowing “that’s how it always starts, but then later there’s running and screaming”.

A quote which segues nicely into the first reason this is a worthy sequel to its game changing predecessor; Jeff Goldblum. His twitchy, confident, chaos theorist was arguably the best character from the first film, a movie that got so much right in terms of creating relationships between its actors and the environment they were thrown into. This is something severely lacking in The Lost World’s DNA, largely due to the singular disconnected archetypes of Vince Vaughn and Julianne Moore’s roles, but a lot to do with Spielberg’s worst piece of child casting in gymnast dino-evader, Kelly.

The decision to make Dr. Ian Malcolm the driving force provides the film with moments of necessary levity and dramatic continuity. In Jurassic Park, you even cared when the bloodsucking lawyer was plucked from the toilet seat, so Goldblum’s presence ensures you have at least one person to root for on Site-B.

The films biggest problem appears to be Spielberg himself, having reluctantly agreed to direct, later admitting that “[The Lost World] made me wistful about doing a talking picture, because sometimes I got the feeling I was just making this big silent roar movie”, and that apathy is evident in a movie that smacks of second-unit direction, editing to meet a release date (the Triceratops stampede through the compound edit is so bad you think the film has jumped), and an inconsistent quality that you wouldn’t usually associate with the directors work.

Hang on, isn’t this meant to be defending The Lost World? True, when Spielberg’s disillusionment bleeds onto the screen you get uninspired riffs on the originals awe striking moments – Stegosaurus river crossing rather than Brachiosaurus treetop buffet – but when he’s on his game, there are examples of set-piece mastery that sit alongside his finest moments.

The twin T-Rex attack isn’t memorable for its dual beasties, although their tag-team munching of Richard Schiff’s character is a gruesome highlight, but for the tumble dryer onslaught of events that find Malcolm and Co. trapped inside the mobile labs as the Tyrannosaurs push them over the cliff. We get 360° shots, carriages dropping around our cliffhanging trio, and the most indelible image of the entire movie; Julianne Moore face down on a rear window, palms pressed against glass, and in a rare moment of quiet, cracks begin to appear like CGI spiderwebs.

It’s the kind of hold-your-breath tension that you very rarely get in big summer tent-poles, let alone just the Jurassic Park franchise.

Spielberg also nods in the direction of Jaws with another all-too-brief set-piece that’s rife with visual inventiveness. One of the sequels biggest challenges, much like the fictional ones facing those who run the park in Jurassic World, is in how it makes the dinosaurs seem fresh after their “they’re moving in herds, they do move in herds” mouth agape introduction in 1993. We’d already seen the Velociraptor’s “clever girl” hunting technique, so how best to utilise them this time around?

The answer is long grass. With the InGen crew running in terror, an overhead shot sees them wander into an ocean of windswept green stuff, cutting a line straight through the middle of the field, until from the periphery of the screen we notice dark lines of collapsing grass arrowing towards them silently. Absent of only Bruce’s fin, they pull their victims underneath the surface, stifling any screams.

It’s arguably the smartest, subtlest, and most horrific use of the dinosaurs at any stage of the series. If Jurassic World manages a scene half as effective as this, then Trevorrow will have earned his money.

The sequels also offered up an opportunity for the filmmakers to incorporate sequences from Michael Crichton’s fantastic source novel for Jurassic Park (more of which can be found in my defence of Jurassic Park III coming later this week); Peter Stormare’s demise at the beaks of the peckish chicken lizards, Compsognathus, was the literary death scene for John Hammond. The sequence with the British family on the beach was also a favourite from the book, but it was to be an entirely new sequence, one pushed for by Spielberg, that would become the iconic set-piece/selling point for The Lost World; the San Diego finale.

Pre-empting Roland Emmerich’s city-centric monster mash, Godzilla, by one year, this twenty minutes, despite the logic defying “who’s driving the boat?” loose-ends, contains more charm, spectacle, and action than that humungous misfire. There was something inevitable about this franchise eventually finding its way onto the mainland, it was either that or the park opening…

Although this feels as tacked on as many of the scenes throughout The Lost World, it’s a Spielberg set-piece in the grandest tradition; the King Kong aping dock escape, the cutesy kid moment followed by the kennel dental floss, the bus dodgems, a final trip to Blockbuster Video for some poor soul, all stitched together in a way that belies the choppy nature of the preceding 90mins.

Sloppy Spielberg is still better than most other directors’ career best, and any film was going to cower in the shadow of the groundbreaking original, but as a standalone flick this still has enough epic sequences to have made a re-watch for the purpose of this feature a nostalgically enjoyable experience.

And if you still don’t like it, then there is one aspect that is undeniably brilliant, John Williams’ reworking of his score for the initial trip to Isla Nublar; darker in tone and heavier in percussion, it’s one of his unsung soundtracks.