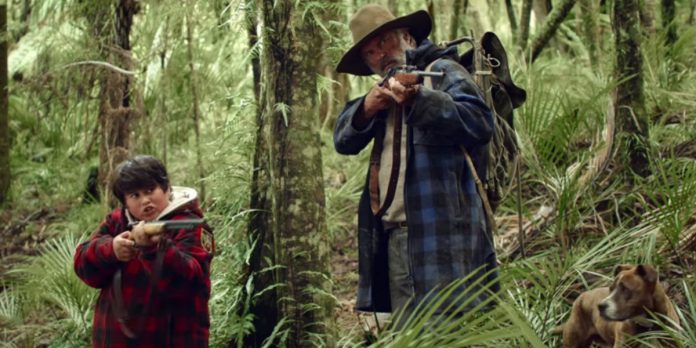 Quirky Kiwi auteur Taika Waititi has firmly established himself as one of the most exciting filmmakers out there. His previous effort, the hilarious vampire mockumentary What We Do in the Shadows, was a critical phenomenon.

His latest film, before heading off to Hollywood and joining the Marvel universe for Thor: Ragnarok, is upbeat comedy drama Hunt for the Wilderpeople; stuffed to the gills with heart and hilarious observations.

Ricky Baker (Julian Dennison) is a troubled teen from the city. Paula (Rachel House) is his care worker and takes a dim view of Ricky’s errant ways. In reality his crimes are minor, and when he finally finds a place he can call home, the youngster is as good as gold. Caring Bella (Rima Te Wiata) is a rough and ready woman who loves the rural backdrop she grew up in currently inhabits. Her husband, Hector, is more standoffish, but is also a man built for the out back.

A sudden tragedy devastates Hector and Ricky. The authorities insist that the boy goes back to find a new family, but he refuses and heads out into the wilderness for himself. Hector soon catches up with Ricky, and in an impulsive moment the pair go on the run with the police, and Paula in hot pursuit.

Hunt for the Wilderpeople is essentially a coming-of-age-story mixed with a buddy movie. The odd couple at the centre of this film are just as odd as the rest of the cast around them. It all adds to a heady mix of which can occasionally catch you off guard. Some of the actions the characters take are clearly played for laughs, but its never too ridiculous. The tone is actually perfectly pitched. Ricky and Hector are wonderfully drawn throughout. When we see them grieving early on, they tug at the heartstrings, when we see them go on the run we see them in action mode and when they bond against the odds they melt our hearts.

Waititi turns up as a religious minister whose sermons are unintentionally laced with comedy. The film as a whole is packed with some great laughs and tremendous performances. Meanwhile Dennison has appeared in a handful of films prior to this, but as the lead here he is a revelation. He more than matches screen veteran Sam Neill, who in turn latches onto a gruff character and gives him a real emotional backbone.

If there is a weak point, then the inclusion of a conspiracy nut in the for of regular Waititi collaborator Rhys Darby as Psycho Sam is a misstep. His appearance slightly unbalances what is otherwise a tightly scripted adventure comedy. Nonetheless, the ongoing film and pop culture references hit the mark every time. We get to see classic TV adverts from the 1980’s brought to life, and even those too young to remember them in the first place will still get the gag.

The film is genuine and propels itself at a cracking pace. We follow the two fugitives as they become minor celebrities and root for them to keep going. Baker and Hector are doing it for the rest of us and sticking it to the man. Referring to themselves as The Wilderpeople, they hark back to a bygone age where a few cuts and scrapes were a cause for celebration rather than the starting point of a health and safety investigation.

If you can get on board with the slightly fantastical tone (and you really shouldn’t have a problem with that given how subtle the direction is with it all), then Hunt for the Wilderpeople is one of the most entertaining films of the year.

Deadpool 2 gives birth to the X-Force in new trailer