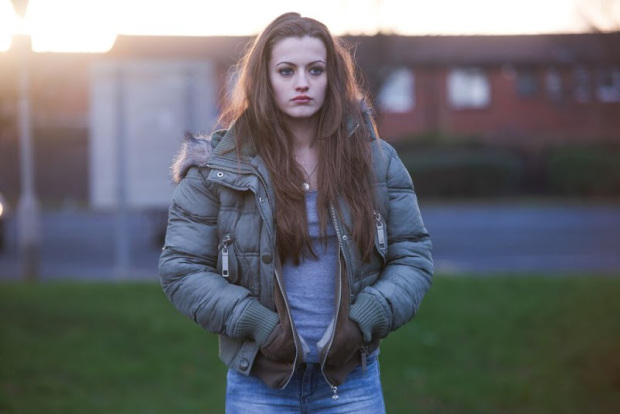 The directorial debut of Helen Walsh, The Violators follows the lives of two teenage girls as they navigate the trials and tribulations of their (seemingly) radically different lives. Shelly (Lauren McQueen) lives with her older brother Andy (Derek Barr) and younger half-brother Jerome (Callum King Chadwick) on a rough council estate in Birkenhead. Despite having just turned 15, Shelly is entrusted with Jerome’s well-being and has to be mature beyond her years to survive her tumultuous life.

Since being kicked out of school, she spends most of her days roaming around the streets and engaging in petty theft to keep herself and her little brother fed. After trying to buy a gold lighter from a pawn shop, she unwittingly attracts the attention of local loan shark Mikey (Stephen Lord) who uses her fear of her abusive father to manipulate her into a sexual relationship. At the same time, she begins developing a tentative friendship with posh and enigmatic older teen Rachel (Brogan Ellis), whose motives remain somewhat elusive.

The Violators is a decidedly bleak and tragic story. It’s made all the more depressing due to how realistic it is. These characters exist in some form all over the country; desperate, jaded and failed by the systems that are supposed to protect them. The class divide is stark. Rachel is taking fencing lessons and is assured a place at the University of Cambridge whilst Shelly has to shove coin-pushing machines in a nearby arcade to provide for what’s left of her broken family.

Rachel’s fascination with Shelly borders on stalking and the question of what drives her obsession is one of the most interesting aspects of the film. At one point she strokes a photo of her on a tablet with tears rolling down her cheeks. Both of the young actresses have little experience under their belts, and their performances are raw and honest, and a great deal is communicated in their sullen glances and subtle body language. Stephen Lord also deserves praise for playing the scummy Mikey to skin-crawling perfection. His interactions with Shelly are both creepy and disturbingly believable.

The payoff to the slow build of the first three quarters of the film isn’t nearly as satisfying as it could have been, but The Violators more than makes up for this. With its standout performances, gorgeous cinematography and its unflinching portrayal of some of the worst experiences that being a teenager can offer, this dark slice of contemporary British drama deserves some serious attention.

The Violators is available on We Are Colony with a bundle of behind-the-scenes extras including interviews, deleted scenes and more. http://bit.ly/22MwMnv