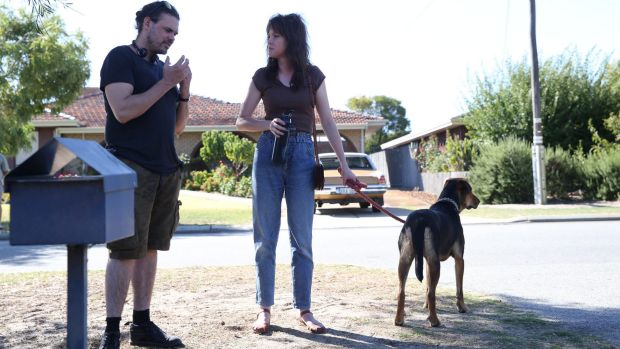 We were fortunate enough to interview talented Aussie filmmaker Ben Young on his debut feature film – the chilling thriller Hounds of Love, which is released in cinemas on July 28th…

Ben, you have such a strong understanding of psychological abuse in a way not many people have.  How did you develop such an understanding of what it feels like to be a woman trapped in an abusive relationship?

Men and women suffer abusive relationships, some physical, some psychological and I wanted to explore the emotional side as I don’t think we see that explored enough. So it was something that interested me.  My mum is a crime writer, she writes crime fiction books and she had books all over the table for research and one was about a female serial killer and I thought that was interesting because I don’t hear about a lot of female serial killers. And the reason why women kill, and I am speaking in general terms, tend to be very different from the reasons why men kill.  What I learned from my research was that the women were often very broken and in very vulnerable places and a sociopath tends to come along and make them feel better than they have ever felt before.

Did you have in mind when writing this film that you did not want to make it particularly gory or explicit?  Considering the story is about a woman being kidnapped by murderers, most filmmakers that cover a similar topic tend to go down the route of making the film as graphic as possible.

Yes, it was a very conscious decision because most films that go down that route aren’t thrillers. Most thrillers these days just throw full frontal nudity at you and it has been done to death and it’s not what I want as a thriller. I’ve seen movies that were called thrillers but they weren’t really thrillers at all, and I’m not on the edge of my seat watching them because although they are really violent, there is no suspense and I don’t care about them as there is no character development.  So I started to rewatch movies that I thought were great psychological thrillers such as Silence of the Lambs and you will be surprised when you go back about how lacking in violence they all are.  In The Silence of the lambs there are only three scenes of violence in the whole film.  I thought in thrillers it’s about developing the characters and having invested stakes in them.  I didn’t want to make a film about the violent acts they carry out, I wanted to make a film about the killers themselves. So I thought limiting the amount of violence shown on screen makes the film more about the people.

With Evelyn, the female kidnapper, she does such cruel things and yet I surprised myself by feeling sympathy for her.  How did you manage to succeed in writing a character where audience members feel opposing feelings of hatred and then compassion?

I wish I could say that was all me but the actress Emma Booth brought so much to the role.  She just brought so many layers to it.  She said from the very beginning I was us to have a ‘sick empathy’ with Evelyn and I wasn’t sure if that was the correct thing to do.  I thought asking the audience to empathise with a woman who was helping her partner to abduct and rape other girls was going to very difficult. But she pushed and pushed and pushed me.  We worked together a lot and shot a lot. Emma is a very collaborative actor and we tried so much. A lot of the film is just her sitting alone and thinking about things, so we shot it in so many ways. We then found the character in post-production.

So what’s next for you? You love this genre, would you like to do another film in this genre?

Yes, definitely and that’s what I’m doing at the moment in Belgrade. It’s a science fiction film, it’s very different. People ask me about genre, but I don’t have a particular genre.  I just want to make stories that call me and broadly speaking these are those stories and I would love to find another dark film about the human spirit that I could dive into.  I would love to make another small film as well.

I was really surprised that this was your first film!  What were the challenges of making this film?

Where to begin! There was nothing easy about it. And the fact it was my first film probably made it harder. I knew how I wanted to do things, but I was filled with self-doubt with every single decision I made.  Also the calibre of actors I was working was intimidating.  I couldn’t have a better cast, but it was really intimidating making my first film and directing Stephen Curry – I studied a movie he was in when I was in high school!

It wasn’t helped by the fact we had a twenty day schedule, sometimes we shot ten minutes of screen time a day. So it was hugely challenging, I could never do more than a couple of takes. I could never shoot it exactly the way I wanted to and also it was the middle of summer. It was 45 degrees or more, it was so hot. That slows everything down, not only physically but the actors were all wearing make-up and it just melts off.  But obviously it was the most rewarding thing I have ever done in my life.

I thought Australians could deal with any heat or harsh environment?

But we cheat with air con these days and we leave it on 24 hours a day!

Hounds of Love is released on July 28th and you can read our review of the film here.