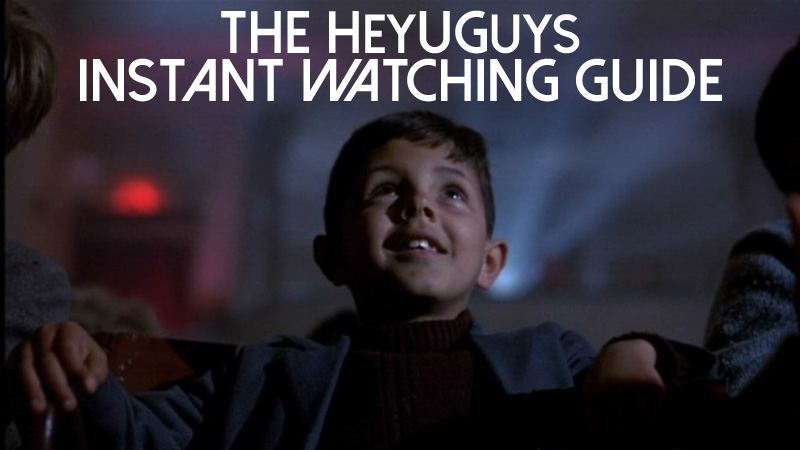 After last week’s onslaught of new stuff, it was perhaps inevitable that this week would be something of a comedown with not much going on. There is some worthwhile new stuff added, the John Milius documentary for one which has debuted on Lovefilm the same time as DVD more or less and, of course, a contender for the worst film of all time. I have used this opportunity to catch up on some titles that were added last week and I didn’t have space for which are definitely worth writing about. I hope you enjoy.

Once upon a time, a bright young writer from New Zealand wrote a brilliant and ahead of its time screenplay called The Truman Show which then became a pretty fantastic film and a career peak for Jim Carrey which predicted the world’s obsession with reality television. The year before, his directorial debut Gattaca tackled the upcoming issue of genetic identity and its predicted impact on the world in a thoughtful and noir like fashion. Although it hasn’t quite come to pass, Gattaca was a timely warning with excellent performances from husband and wife (at the time) Ethan Hawke, Uma Thurman and a possible career best Jude Law.

Then Andrew Niccol clearly ran out of ideas, or had at least used up his good ones. S1mone was a let-down and uneven at best, Lord of War was good but too in debt to other similar films, then In Time harkened back to Gattaca with another big sci-fi idea but had no idea what to do with it. So then Niccol took a job as a director for hire rather than spend more time on his own half-baked ideas, an adaptation of Stephanie Meyer’s body snatchers riff The Host.

I’m no Meyer hater but I can tell this probably works as a book with much internal struggle going on but it dies on its arse completely on-screen. Niccol has copied and pasted the book on to the screen with a meagre budget and no life what so ever. Poor Saorise Ronan is truly a wonderful screen presence but she is ill-served by a script which is flat, dull and completely without merit whilst bland pretty people float around her spouting terrible dialogue making little sense to anyone who hasn’t read the book.

The Host also looks no better but perhaps worse than your average TV pilot and shouldn’t have been let anywhere near a cinema screen. The worst film of 2013 by a country mile.

When this film about the Boxing Day 2004 tsunami came out, there was a lot of criticism about the fact that the real people who the film is based on were actually Spanish and that Naomi Watts and Ewan McGregor are decidedly whiter than that. Some of the more outspoken critics online did their usual thing of standing on a soap box and not actually reviewing the film placed before them.

Regardless of the whitewashing or relative overlooking of the local people wiped out in the real life tragedy, the actual film is very effective. The Orphanage director J.A Bayona does a phenomenal job not just depicting the terrifying wave impact but also with his cast and the aftermath as portrayed here is even more terrifying that the actual event.

Juggling child actors with top-level performances from Watts and McGregor with gut wrenching scenes in an environment of floating danger which can easily kill you, is no easy feat but Bayona manages this and it’s a very worthwhile film that can’t fail to make you cry.

Some of you younger film fans might not know this but it’s entirely possible that without the efforts of one John Milius we may never have had the likes of Shane Black and Quentin Tarantino and their endlessly quotable dialogue. In the late sixties and early seventies, film was about to go through a major cultural shift with the movie brats George Lucas, Spielberg, Coppola and Scorsese about to make their presence known and lay down the template for what was to come in the decades afterwards.

One of their number was classmate John Milius who was kind of an extreme character and ended up being one of the first writers to receive acclaim as a high paid talent before he had directed anything, writing Dillinger and Apocalypse Now to the tune of box office dollars and awards recognition. Milius the documentary is a fascinating look at the man and his films, his legacy and his eventual fade from the limelight as Hollywood politics leant more and more to the left and Milius stayed decidedly to the right and made the original Red Dawn which though successful, was so controversial at the time and right-wing that it essentially killed his career.

Milius would not make any concessions for any studio boss and often brought guns to meetings which wouldn’t help his reputation. With interviews with all kinds of major figures including Steven Spielberg, Francis Ford Coppola, Schwarzenegger, Sylvester Stallone, Scorsese and George Lucas (who strangely comes across as being really cool) this is a fascinating and handsomely mounted portrait of one of the last true mavericks in the movie business.

One of the more overlooked films of last year,  going straight to DVD, was writer and director Megan Griffith’s portrait of a young girl abducted into sex slavery. Jamie Chung is a revelation as a young Korean girl ripped from her home and imprisoned in a desert farm to work as a Las Vegas prostitute.

Chung starts out wide-eyed and innocent and goes to savvy and scheming rather quickly, looking for angles to increase her chances of escape as the light fades from her eyes, and this is the films major flaw. At just over an hour and a half, Eden’s journey feels rather incomplete and really feels like it needed more time to breathe and make a lasting impression. Griffith’s direction wisely doesn’t focus on lurid detail but more the aftermath and the morally bankrupt characters ferrying the victims back and forth.

26With many of the supporting characters played by underrated talents like Beau Bridges and Matt O’Leary, you never quite know where things are going and things often take an unexpected turn, characters earning sympathy despite relatively despicable acts. Eden recalls the superb Winters Bone from a few years back in its examination of darkness in Middle America and it’s possible that Griffiths may well make a masterpiece one day. For now Eden is a flawed but worthwhile film deserving of your time.

I haven’t seen this in years but I suspect it isn’t going to hold up. At the time of release this was geared to appeal to the US rave scene kids with a soundtrack by dance guru BT and featuring No Doubt, Len, Fatboy Slim, Air and DJ Rap. It featured a hot young cast including Katie Holmes, Sara Polley, Timothy Olyphant, Scott Wolf and Taye Diggs.

It was marketed as a teen Pulp Fiction and was directed with energy and gusto by Swingers helmer Doug Liman. Then it came out and died at the box office but the fact is that although time has moved on, Go is funny, full of energy and just so much fun and a nostalgic blast in this day and age more than likely. This was a time when Liman was still being inventive and clever before he went and made something called Jumper.

So last week we had Bruce Willis at his crappy, lazy and coma inducing worst and this week we have one of his best efforts. Whilst A Good Day To Die Hard retooled an existing 24/Die Hard cross over script into something bland and depressing, Die Hard with a Vengeance retrofits a script called Simon Says which was once also Lethal Weapon 4, into something fun, violent, loud and thrilling which is true to the formula laid down by the 1988 original after the relative mis-step of Die Harder.

John McClane is even more down trodden and schlubby here and Willis plays it perfectly, getting all messed up the way we love and having some witty banter with Samuel L.Jackson’s put upon shop owner along for the ride. Willis should be made to watch this 100 times before agreeing to any more outings for the now invincible and obnoxious McClane.

Available on the pay once and rent for 24 hours services are the following titles:

As of time of writing I have not yet seen Riddick but I couldn’t help thinking that it looked just like a remake of Pitch Black. After the relatively overblown The Chronicles of Riddick, this is David Twohy and Vin Diesel going back to basics with another planet, another set of creatures and another whole load of mercenaries to slaughter.

Word is mixed on this one with some praising its thrilling efficiency and some criticising its misogyny despite a star marking turn by Battlestar Galactica’s Katee Sackhoff. More than likely this will be this year’s Dredd and end up making a mint on home video, leading to more fans and demands of a sequel which will appear in another nine years or so.

Despite this being the second Assault on President 13 film to come out last year it is arguably the better choice. Its counterpart Olympus Has Fallen suffered from a strange mix of ultraviolence and a central relationship barnacled with banal cliches, not discounting the actors’ performances it was a lurching, jerking film with had you repeatedly over a tonal barrel. Not so with Roland Emmerich’s offering.

In many ways he is key to the success this film enjoys, he being one of the few directors to destroy the White House on a couple of occasions before (the money shot from the Independence Day trailer will never be topped; it announces in no uncertain terms that he had arrived in America). It is, as always with Emmerich, a hotpotch of stereotypes and unwavering borrowed patriotism however Channing Tatum and Jamie Foxx are clearly having fun running and gunning around while set pieces boom and clatter around them. Good fun if you like that sort of thing.

The Equalizer 2 and more of the best action movie sequels