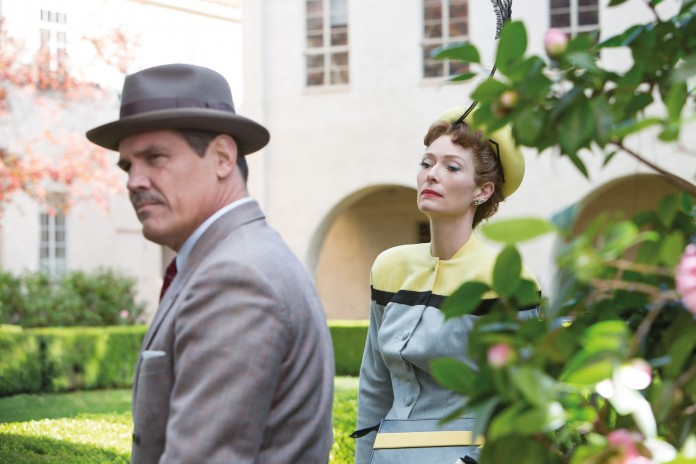 Filmmakers making movies about filmmakers, starring actors playing actors, often run the risk of ostracising the viewer, in a similar vein to what Birdman managed so emphatically. But the Coen brother’s latest endeavour Hail, Caesar! is a tale that takes place on the inside of the industry, and remains inclusive throughout. This is an in-joke (and a funny one at that) that we can all be in on.

Set in the 1950s, Josh Brolin plays Eddie Mannix, a Hollywood fixer-cum-PR guru for Capitol Pictures, who makes a living out of solving problems, ensuring that the actors who perform in his productions maintain a saintly persona in the public eye. Needless to say, behind the facade are a collective of stars who seem incensed on making his job just that little bit trickier, which is particularly the case when the famed Baird Whitlock (George Clooney) is kidnapped on the set of the studio’s latest blockbuster Hail, Caesar!. With twin sister journalists Thora and Thessaly Thacker (Tilda Swinton) breathing down his neck, Mannix realises it’s going to take a miracle in the art of diversion to steer them away from this remarkable set of events.

Ethan and Joel Coen have presented a glorious series of spot-on spoofs of old Hollywood classics, capturing that sense of blissful innocence and romantic charm, thriving in the flaws and imperfections of such endeavours. But the entire picture feels like something of a pastiche, as the aforementioned skits come under the umbrella of a film that is abiding by such a notion itself, as the whole film is shot in such a way to resemble this particular period of cinema, be it the lighting or staging, or the naively, and yet endearingly unauthentic sets that make up the indelible backdrop.

Though the deftly executed spoofs inject the majority of the humour into this piece, there are so many of them this does feel akin to a sketch show. But the film is grounded by its barbed political message, the satirical undercurrent that runs right the way through this film, and though thriving in grandiosity, there’s a clear point that the Coens are vying to put across. Meanwhile, it’s Alden Ehrenreich who is the real star of the show, as the contagiously optimistic, if unaccomplished actor Hobie Doyle, as Ralph Fiennes (who plays director Laurence Laurentz) continues his impressive foray into comedy, with yet another memorable turn to follow on from the likes of The Grand Budapest Hotel and A Bigger Splash.

That all being said, the finale is somewhat unsatisfying, pointing to a detrimental lack of narrative implication, with a distinct absence of peril, as we remain without that one true protagonist in this ensemble piece that we can fully focus on and invest in. But it takes little away from another fine offering to add to the collection from this duo of tremendous filmmakers, and it’s a movie that would undoubtedly work well as a double bill with the recently released, Oscar nominated Trumbo. Though be sure to catch this one second, as it’s always wise to end on a high(er) note.