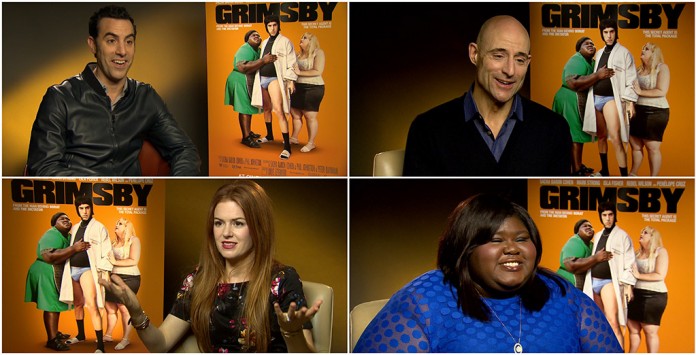 Sacha Baron Cohen’s R-rated rise in the world of comedy has been quite something to watch of late. Bringing his larger than life characters to the big screen was always on the cards after the runaway success of Ali G, and with Borat, Bruno and The Dictator the actor has consistently sought to out-do himself. Grimsby (known in the US as The Brother Grimsby) is his latest walk along the line of cinematic bad taste.

Pairing up with Mark Strong, Grimsby tells the oft-told tale of two brothers, two paths walked separately, coming together to find themselves and each other. One a super spy, the other a football hooligan. It’s nuts, and the reviews have been very positive.

James Kleinmann sat down with the cast to talk about the weird world of espionage and estrangement.

You can read our review of Grimsby here, and see the interviews below.

MI6’s top assassin (Mark Strong) has a brother. Unfortunately for him, he’s an English football supporter (Sacha Baron Cohen) from the town of Grimsby. Nobby has everything a man from the poor English fishing town of Grimsby could want – 9 children and the most attractive girlfriend in northern England (Rebel Wilson). There’s only one thing missing in his life: his little brother, Sebastian.

After they were adopted by different families as children, Nobby spent 28 years searching for him. Upon hearing of his location, Nobby sets off to reunite with his brother, unaware that not only is his brother an MI6 agent, but he’s just uncovered a plot that puts the world in danger. On the run and wrongfully accused, Sebastian realizes that if he is going to save the world, he will need the help of its biggest idiot.