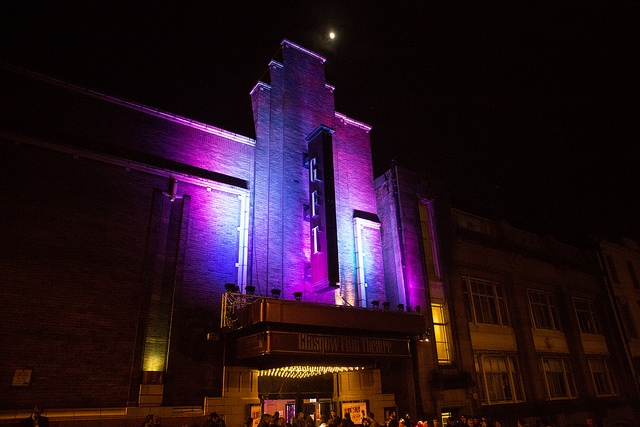 The Glasgow Film Festival is one of the fastest growing film events in the UK. Having firmly established itself on the movie calender over the last decade, it is now plays host to some of the biggest names in the industry from home and abroad.

It played fantastically well with the crowd, all of who were eager to see the latest offering from the film-making duo.

What really separates this festival from others is the way in which everyone is made to feel part of the party. There is little separation between press, industry and public and it makes for a convivial atmosphere that is a rarity.

Testament to this was the walk we all took in unison after the screening from the festival hub of the GFT to a fancy club somewhere in Glasgow. All that was needed to enter was a ticket from the opening film, and once inside you could hang out with celebrities, festival organisers or other eager film fans. Its something other festivals could learn from.

Another film highlight was the fantastic Urban Hymn, Michael Caton-Jones’ latest venture. This was a personal highlight for me. It used the backdrop of the 2012 London riots, but has a universal appeal with a transcendent use of music.

The other aspect of this festival that works particularly well is the Q&A sessions that are held after screenings. Unlike some events where the atmosphere can be stilted or even worse toxic, here our hosts made everyone feel at ease. No matter what you have just seen, the conversation flows and it makes for a pleasant environment.

Most of the events are all within walking distance of one another, and if they aren’t you will be able to find the venues with ease.

The special events and screenings are another aspect that GFF have worked on for the last few years. These events have become more ambitious, and this year we were treated to a number of memorable nights.

Of these, a Raiders of the Lost Ark screening at the spectacular Kelvingrove was tough to beat. We even found fedoras lining the streets on the way to the venue, but we’re no entirely sure if that was part of the plan or a result of the storm passing through Glasgow…

If a night of Indiana Jones was topped, then it was by the Con-Air screening held a few nights earlier. We were picked up from GFT and taken by ‘prison bus’ to secret venue. You can imagine people being hesitant about such a gimmick, or even refusing to take part in putting orange overalls and handcuffs, but guess again.

It proves you don’t have to spend huge amounts of money, or charge vast entry fees to get event cinema right. This was one of the best examples I can think of in recent years. The film was the right choice, the themed venue (complete with plane carriage stuck onto the side of the building!) was perfect and the atmosphere was brilliant.

The surprise film was another big hit, a Jane Austen adaptation no less. Kate Beckinsale’s turn in Love & Friendship is one of those that reminds everyone about how a Hollywood star known for everything but her performances can still turn things around. It’s a classic, and bound to be one of the best films of the year.

Finally the festival ends with a healthy dose of horror and Anomalisa… Charlie Kaufman’s engaging story of a lonely man going through a crisis in a strange hotel. Oh, and its all told with puppets. Of course it is!

The festival tends to get the bigger films after they have been screened elsewhere, such is the nature of smaller international festivals. However, given how open all the events are to the public, it is the first time ordinary cinema-goers can see hotly-anticipated titles such as Disney’s Zootropolis or Austrian horror Goodnight Mommy.

Overall the festival works best as a public-friendly event and the location suits the ambitions set out from the beginning.