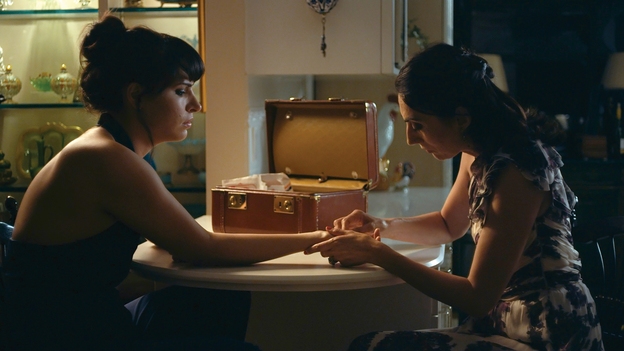 Iranian Brooklynite bisexual Shirin (Desiree Akhavan) is still reeling from her recently terminated relationship with Maxine (Rebecca Henderson). She can’t talk to her parents about it because they don’t know she’s bi, leaving best friend Crystal (Halley Feiffer) to guide her through her heartache as best she can.

With Akhavan having recently joined the fourth season of Girls, comparisons to Lena Dunham — the self-appointed voice of her generation — are inevitable. Appropriate Behaviour has a lot in common with Dunham’s show, featuring as it does another self-centred young woman with an egocentric view of modern American life; but whereas Girls is nominally an ensemble piece, Appropriate Behaviour is essentially a one-woman show. The Persian-American slant is a intriguingly novel one, if also a little esoteric, but even the most relatable audiences will likely never be as interested in Shirin as she obviously is in herself.

It’s not that Shirin is unlikeable per se, but she is not particularly compelling. Women, Iranians and bisexuals are all under-represented in American cinema, but despite embodying all three demographics at once Shirin comes across as slightly idiosyncratic rather than unusually complex. Akhavan pays lip-service to her character’s cultural heritage and sexual identity — Shirin even remarking to Maxine that she of all people has an excuse for remaining in the closet — but while it might be considered progressive to treat such characteristics as incidental rather than integral to the narrative in this case it results in quite a passive protagonist. Given that there’s so much potential for conflict Appropriate Behaviour is infuriatingly low on drama.

Her relationship with Maxine suffers too, with the latter given short shrift in terms of narrative voice and largely confined to flashback. It’s never entirely clear whether Shirin’s seeking revenge or reconciliation, so half-hearted and ineffectual are her efforts either way, and without a clear goal to work towards the story slowly stagnates.

The root of the problem is traceable back to the film’s non-chronological structure, and specifically Akhavan’s decision to cut between the couple’s initial courtship and eventual break-up. It’s hard to invest in Shirin and Maxine’s romance knowing that it’s doomed to fail, which in turn undermines the impact of its deterioration. Without knowing that Maxine really means to Shirin it’s impossible to assign the correct value to their relationship. What exactly is the best case scenario?

What Appropriate Behaviour might lack in conviction and coherence, however, it more than makes up for in wit and intelligence. Writer, director and star, Akhavan has conceived a modest number of stand-out comic set-pieces, just enough to showcase her considerable talents while also pointing towards bigger and better things in the years to come. Her scenes with Henderson may be pretty hit or miss (though the latter does the best she can with the material she’s given) but Akhavan does successfully spark off a number of her other co-stars.

There’s no denying that Appropriate Behaviour is often good fun with a handful of truly great sequences, but as a film it’s anything but consistent. Ultimately, Shirin’s narcissistic attitude and Akhavan’s self-serving story leave a lot to be desired; for all the character’s potentially fascinating facets, her creator seems determined to focus on perhaps the least interesting of all: Shirin is just another disaffected millennial living in New York. Acting ‘appropriately’ is only going to get you lost in the crowd.