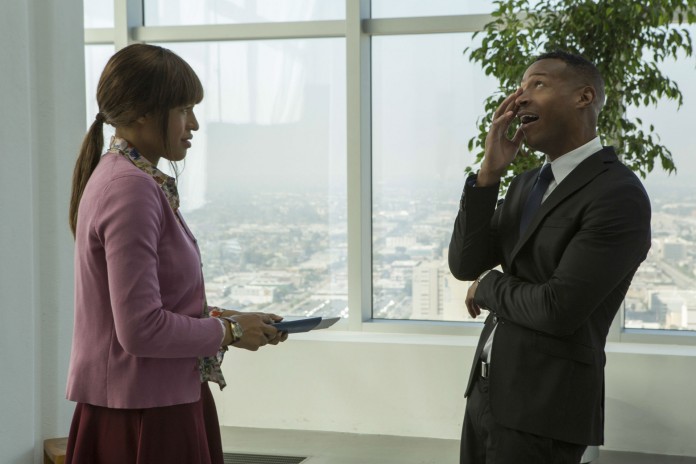 Having illuminated the screen in the pioneering horror pastiche Scary Movie, followed closely by the somewhat less original Haunted House, Marlon Wayans has developed a reputation for himself as the contemporary king of the spoof, picking up where the deliciously deadpan Leslie Nielsen left off – and it’s one that has been perpetuated with the comedian’s latest endeavour Fifty Shades of Black. You can probably figure out what he’s parodying in this instance.

Sam Taylor-Johnson’s reimagining of the immensely popular E.L. James’ novel is barely a year old, but still Wayans has taken off where Jamie Dornan left off to portray the libidinous, elusive bachelor Christian. The subject of an interview by the blissfully naïve, stand-in journalist Hannah Steele (Kali Hawk), the pair take an instant liking to one another. Though by entering in to a relationship with the affluent businessman, Hannah has to ponder whether she is willing to be contractually obliged, sexually, to his assertive, brutal bedroom antics, as he shows her into his red room…

Scary Movie ridiculed an entire genre, allowing much scope and many references points as it poked fun at the archetypal tropes of the traditional horror production. However, Michael Tiddes’ Fifty Shades of Black is very specific to just one film – and a rather unique one at that – which makes the pool of comedic potential far shallower, ultimately transpiring in a distinct lack of truly hilarious moments (despite turning towards the likes of Whiplash and Magic Mike for inspiration). There are undoubtedly four or five one-liners that will have you in stitches, but given the scattergun approach to jokes, that makes for a rather minuscule percentage.

The majority of the gags that do land come in the early stages – mostly because the concept has not been worn out yet. Effectively riffing on the same idea, perhaps this endeavour work be better off as a short, because to say that it struggles to maintain its comedic fervour until the bitter end would be something of an understatement, as tedium kicks in, dramatically, and becomes a challenge to subsequently shake off. After 20 minutes you really do feel the picture has run its course – and it’s not even a third of the way in.

Though Fifty Shades of Grey had vied tirelessly to be taken seriously, it maintained a playful edge and provided many jokes irrespective of whether they were deliberately enforced or not. So to parody a film that is something of a parody of itself, is a superfluous task, and one that simply didn’t need to have been undertaken. Fifty Shades Darker is still to come out of this particular franchise, and that remains a more appetising proposition than any potential Wayans sequel – and that’s really saying something.