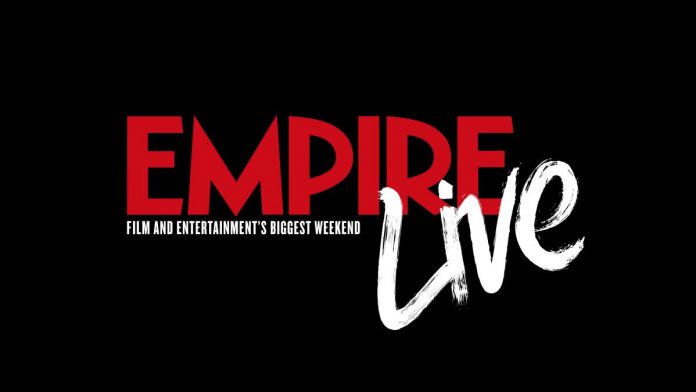 It somehow feels rather apt that one of the few monoliths of film print publication remaining in (relatively) rude health should dip their toes into the events market. With the launch of a two day (and a bit) festival, Empire Magazine set sail with a celebration of all things film with the snappily coined Empire Live.

The location for their festivities was a bold one, because if recent history told us anything, then it is that triumph is pitted against anyone trying their luck within the cavernous expanse of the O2. After all, a white flag was reluctantly waved by the London branch of the Sundance Festival which, after 3 attempts, gave up, withdrew and relocated to Picturehouse Central due to an inability to make the venue festival friendly.

First impressions of the programme of Empire Live made it abundantly clear that an awful lot of thought had gone into the itinerary. Boasting a calendar chockfull with breadth and diversity, there were offerings ranging from live podcasts, Aardman model making and Master Classes to slime-splattering audiences during a screening of the original Ghostbusters. They even showcased a preview screening of Mel Gibson’s upcoming Hacksaw Ridge. Furthermore, in what was perhaps an excitable affirmation of the state of television, or a damning indictment on a palling film scene (depending on your viewpoint), the programme incorporated small screen favourites pumped up onto the big screen. Of course this included an appearance by the omnipresent Game of Thrones. How could it not?

Throughout the festival site, a convivial atmosphere predominated. The apex of which could arguably be found in The Empire Hub; a revolving cinema-centric door of the silly, the serious and the sincere. This included a script reading of Trainspotting and a string of conversations (including a very popular ‘Women on Screen’ panel in association with Grazia). Back in the cinemas, esteemed distributor Criterion showcased some of their collection, including pristine prints of D.A. Pennebaker’s seminal documentary on Bob Dylan, Don’t Look Back, and Stanley Kubrick’s pulsating satire, Dr Strangelove. A 30th anniversary screening of Labyrinth was accompanied by an illuminating post-show Q&A with costume designer Brian Fround and workshop artist Wendy Midener. In fact, Q&As were sprinkled all through the programme.

Straddling the line between the proven and the daring was never going to be easy. It is a tricky task to try and be all things to all people, and yet as much as it is possible, Empire Live managed it. After Sundance’s failure at the venue, Empire struck back, and as just like the sequel alluded to in that awful, awful pun, this was better than the original. The standard has been set. Now, please repeat the trick and do it all again next year. No biggie.

Win tickets to a screening at Empire Live

I Need a Heroine: Adèle Blanc-Sec and the Dearth of Action Women in Film