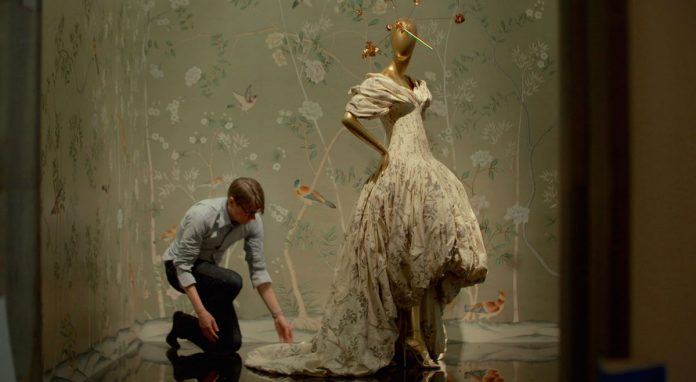 Documentary-maker Andrew Rossi has become a recognisable name, something not easy to achieve in a genre that is largely (and unfairly) overlooked. His work is all about picking institutions apart  – that is to say, understanding the people that underpin them. He’s best known for Page One: Inside the New York Times, where he uses his approach on the US newspaper.

For the The First Monday in May, Rossi brings his camera to NYC’s Metropolitan Museum of Art. The Met has an up and coming Costume Institute, which is still, it is very much implied, struggling to get itself taken seriously by the museum’s more established departments. Every year, the Institute puts on a exhibition, which is launched the first Monday in May by the celebrity-packed Met Gala. Rossi follows the preparation for the 2015 instalment, named China: Through the Looking Glass. The idea is to bring together Chinese fashion, Chinese-inspired Western clothes, and pieces from the Museum’s Ancient China collection. Andrew Bolton, the curator is at this stage already a star in the museum world for spearheading the wildly successful Alexander McQueen: Savage Beauty. In addition, the documentary also follows the organisation of the Met Gala itself, managed by Vogue editor Anna Wintour, who is a long-standing patron of the institute.

The First Monday in May makes for a pleasant watch. It is not, unfortunately, a very good documentary. Rossi clearly accumulated a wealth of material during the project, and was given an incredible level of access. Yet, he never really focuses on anything at all, darting from topic to topic with dizzying speed. Is the documentary about fashion’s place in the art world? Andrew Bolton’s prodigious career? Whether Wintour is as tough a cookie as she looks? The history of Chinese fashion? The internal politics of the Met? Or even how celebs interact with each other? We’re never sure. There are hints of all of the above, and as a result of being so aimless, the documentary fails to yield any real insights.

Adding to this, Rossi is not besides indulging in a bit of needless celebrity worship. There is, for instance, a long gloating sequence of red carpet arrivals on the night of the gala. Or we are shown (more than once) Wintour and her assistant labouring over the complicated table plan, dropping lots and lots of big names. There’s also numerous clips of people talking about how important the night is – and congratulatory text at the close of the documentary, which highlights how successful the endeavour was. Flicking from this to an earnest discussion on Orientalism, or museum inter-departmental politics, is jarring.

That is not to say that The First Monday in May does not have its moments. There is something really satisfying in seeing such an ambitious project (the exhibition) come together – and it looks visually spectacular. Rossi may cover the red carpet extensively – but he then segues to the famous faces milling in the corridors of the Met. Away from the cameras and among only each other, the stars suddenly become ‘just people’ again. It’s unexplainably moving.

Any of the topics The First Monday in May touches upon could have made for fascinating documentaries in their own right, and so it is all the more disappointing that Rossi squanders the opportunity to delve into any. The film might still please fashion lovers, or museum aficionados, but for general audiences curious about the world of haute couture, the excellent Dior and I is likely to be far more satisfying.