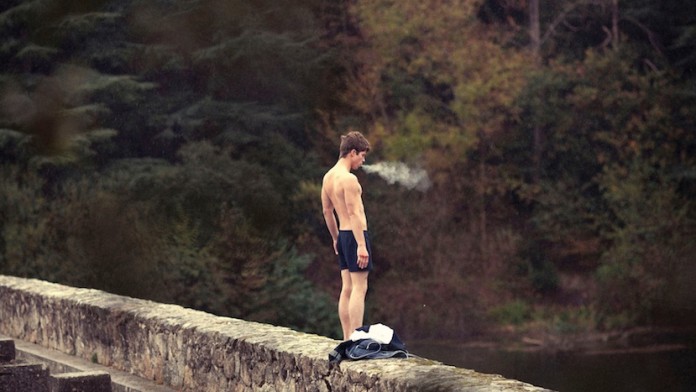 With only a mere handful of acting credits to his name, it came as something of a surprise when the London Critics Circle presented Alex Lawther with the award for Young British Performer of the Year. With a significant if somewhat insubstantial role in The Imitation Game (where he played a young Alan Turing) it was hard to comprehend how such a brief showing could earn the actor the award. But it all makes sense now, and has since become patently clear. They must’ve seen Andrew Steggall’s Departure – where he flourishes with a breathtaking turn.

Lawther plays Elliot, who has taken a summer break alongside his melancholic mother Beatrice (Juliet Stevenson) to their holiday home in the South of France, to clear it out before finally selling up. With her marriage evidently on the rocks – the French property an evident casualty – Elliot has relationship problems of his own, as be grows a fondness for the local Clément (Phénix Brossard), while he attempts to determine as to whether the French teenager shares the same desires that he does.

Steggall’s debut feature is beautifully shot, and done so in an endearingly resourceful way. He just allows the camera to linger, be it outside a room looking in, or through more creative shots such as gaging Beatrice’s emotions through the car’s rear-view mirror, this remains voyeuristic in its approach, and yet so remarkably intimate. The filmmaker also captures that sense of idyll serenity associated with summer evenings on the Mediterranean, with an almost burnt orange aesthetic, working as the perfect contradiction to the internal pain and conflict taking place within the aforementioned trio of protagonists.

Each character is so well-rounded and full-bodied too, meticulously crafted and complete with their own individual narratives that could easily be enough to warrant any of them being the lead focus of this piece. The introduction of Beatrice’s husband Philip (Finbar Lynch) is a negative however, and while nothing against the actor’s performance, it’s just one sufferer too many. There is only so much we can invest in and become emotionally attached to, and when he enters into proceedings complete with his own unique set of issues to content with, it’s somewhat overbearing.

That said, Steggall must be commended for avoiding any sense of overt theatricalities, which is quite the achievement given the content of the narrative. To have three lead characters with such significant issues to resolve, and navigate your way around that without feeling as though we’ve veered into the realm of the melodrama is impressive to say the least – even more so when you consider the fact the director has managed to inject an extremely subtle sense of humour into proceedings too, marking what is a truly accomplished debut.