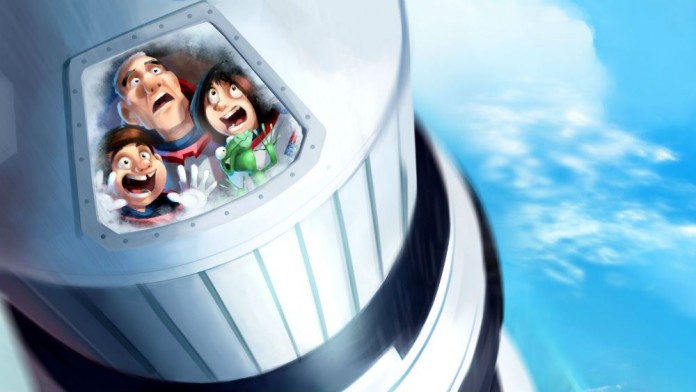 A tremendous space race story will shortly be soaring onto the big screen to chase away children’s late January blues. Director Enrique Gato’s Capture the Flag is both an exciting and accessible introduction to the story of man’s first walk on the moon and a fanciful smack-down to the conspiracy theorists who deny it.

Mike, Amy and Marty’s big summer dream is to win a game of capture the flag. And they come close. In a dynamic opening sequence the trio of friends showcase their courage, ingenuity and teamwork as they kite-surf to within a hairs breadth of victory. But, as ever, triumph is short lived for the tween underdogs.

Mike’s father Scott Goldwing (voiced by Toni Mora) knows what it means to be an underdog. As an astronaut in training at a lacklustre incarnation of NASA he labours under the shadow of his father Frank’s legacy: the proud man who mysteriously walked away from the Apollo XI mission. Frank Goldwing (Camilo Garcia) chose not to explain his decision to his bewildered young family. Instead he left them too.

But the audacious plans of a megalomaniac billionaire and his (pleasingly familiar) advisors reignite NASA and offer all three generations of Goldwings a chance to change their fate. In striking a gaudy blow for his own father’s honour, Richard Carson (Dani Rovira) exposes the entire lunar landing as a fraud. He gleefully tells the scandalised world that HE will be the first man to plant a flag on the moon. And lo the space race is on!

Paramount are releasing this Spanish produced feature a fortnight shy of half term and one can only hope that it has the tenacity to stay put for the holidays. Because what this Little Space Engine That Could lacks in state of the art animation is more than made up by its heart. It encapsulates an adult nostalgia and affection for the Apollo XI legend together with the “Space, wow!” enthusiasm of childhood to great effect.

As POTUS and NASA bring in their oldest and best to prep the next gen for their scramble towards the Sea of Tranquility – to safeguard the original flag and silence the doubters – Mike and his friends see an opportunity to heal the family rift. There are undeniable parallels to a latter day Goonies in their ingenious training sessions, cunning plan and its execution. Rather inevitably a grander adventure evolves.

Though adults will undoubtedly flinch and roll their eyes through excesses of the painfully trite dialogue dub they may equally chase away a tear at the undeniable sweetness it masks. In utilising the real world knowledge of astronauts Miguel Lopez-Alegria and Alan Bean – who made a moonwalk with Apollo 12 – Gato and his team have underpinned Capture the Flag with a moving and heartfelt authenticity.

In the great tradition of animated film Richard Carson of course has a dastardly ulterior motive. And Mike’s friend Marty (Javier Balas) both a gift for gadgetry and a comedy lizard. Greed, sabotage and a pair of stowaways ratchet the action up a notch and as the story goes interstellar – and a high stakes game of capture the flag unfolds – Alexander Adams’ zippy edit is guaranteed to captivate even the most fidgety audience member.

With echoes of Up, The Goonies and Apollo 13 – plus lashings of panto villainy to mentally boo – Capture the Flag sits comfortably at the classier end of children’s fare for the start of 2016.