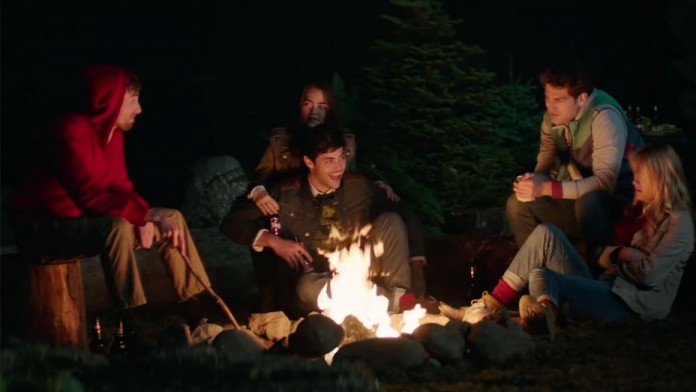 One of the horror genre’s most endearing traits is the sense of ambiguity – where the next scare is going to come from, who will die next? However you lose that sense of suspense and intensity, as an entire notion made somewhat redundant, when dealing with art of the remake – particularly when dealing with an endeavour released so soon after the original. It also doesn’t help when the reimagining, which in this case, is that of Cabin Fever – is absolutely dreadful.

It’s been 14 years since the Eli Roth production, and now Travis Z brings the tale back to the big screen – as we peer into the seemingly short lives of five college students setting off to a cabin, deep in the woods, for a supposedly peaceful getaway. While Jeff (Matthew Daddario) and girlfriend Marcy (Nadine Crocker) spend most of their time together, Paul (Samuel Davis) is desperately vying to win over his dear friend, and crush, Karen (Gage Golightly). In the meantime, Bert (Dustin Ingram) sets off with a rifle to shoot some wild animals. But it soon transpires that the only lives the collective should be fretting over, are their own – for there’s an outbreak of a flesh-eating disease in their vicinity, and it’s one that’s not particularly easy to escape from.

This superfluous production fails to transcend the tropes of the genre at hand, and what’s even more irritating, is that it doesn’t even appear to be trying to – seemingly content at playing out just as you expect it to, not bringing anything new or unique to the franchise, like a carbon copy of what came before (it’s almost shot for shot, literally). What also doesn’t help this creatively stifled endeavour is that you simply do not like any of the five protagonists, instead finding yourself fervently anticipating each and every death, which detracts from the entire point of a survival horror film of this nature.

Four years ago Drew Goddard and Joss Whedon collaborated to bring us The Cabin in the Woods, which ridiculed this exact sub-genre to a tee – no doubt using the original Cabin Fever as great inspiration for their indelible parody. But it did so to a point of no return, and you feel as though there is no longer a place for this hackneyed type of movie in a contemporary cinematic landscape, not since it’s conventions have been so lovingly poked fun at. Nonetheless Travis Z felt it was worth a shot, which might just explain why he has only put the initial to his surname on this picture. Because if you had made this movie, I doubt you’d want anybody to know your true identity either.