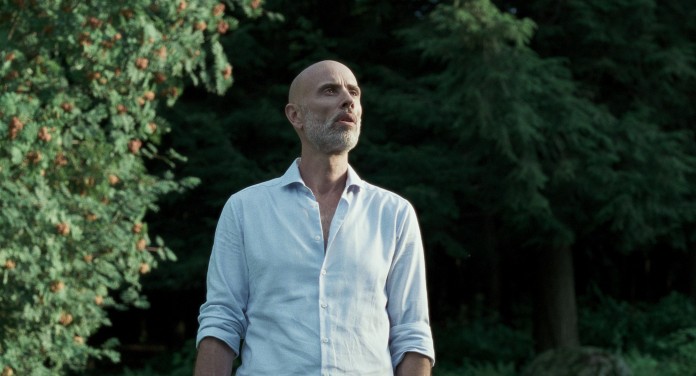 Never trust a man who wears a shirt to bed. A small nugget of advice, and one that is rather sound where James Hyndman’s Boris is concerned, in Denis Cote’s Boris Without Beatrice. For the role is a profoundly unsympathetic one, with few redeeming qualities. That isn’t a problem as such, but within this tedious endeavour there isn’t any one character who is endearing enough to balance it out, making for a distinctively cold piece of cinema.

Boris is an affluent, self-absorbed man who appears to be of the opinion that if there isn’t a problem, it may be best to create one. A thorn in the side of his employees – not to mention the mayor, who he complains to regularly – at home life is somewhat more sombre, as his wife, Beatrice (Simone-Elise Girard) lays motionless is bed, suffering from a severe case of depression. Though undoubtedly hurt by his wife’s condition, it doesn’t stop the businessman flirting with their maid Klara (Isolda Dychauk) and sleeping with his colleague Helga (Dounia Sichov). Absolving himself of blame, and playing the victim in the situation, that all changes after the arrival of a rather elusive presence in I’Inconnu (Denis Lavant) who has his own unique (and scarily well-informed) take on the matter.

Cote’s latest is a better film when thriving in the notion of simplicity – something the director carelessly, and persistently, deviates away from. This character drama is suffocated by the superfluous flashbacks or scenes between Boris and Helga where he takes her to the shooting range or the racetrack. The film is more enriching when just at the flat, focusing on the more minimalist approach, as we watch Boris navigate his way around the circle of women orbiting around him, be it his wife, daughter, maid, fling or mother. When doing so this adopts tropes of the archetypal farce, and this is when the film truly comes into its element.

Needless to say, Lavant is mesmeric in his cameo performance, appearing to Boris like something of a Fairy Godmother, while adding a vital touch of surrealism and injecting some humour into proceedings. But as ever with this talented performer, there’s always a dark, demented edge, which becomes a prevalent theme in the latter half of this production, but it’s regrettably not enough to win round an already deflated audience.